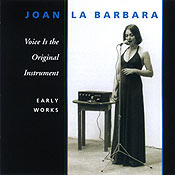 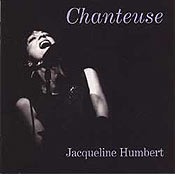 You can rely on Lovely Music. The new-music label Lovely Music invariably provides some of the most interesting new music available on recordings. They can be relied upon in a business with its fair share of unreliables — immaturity, bad quality recording, sophistry — to give good quality interesting recordings of innovative work. They’ve been around for at least two decades, and their catalog covers some of the very best in what can be called “downtown” new music — conceptual music influenced in large part by John Cage, world music, and modern American art and dance after abstract expressionism (let’s say Warhol and after). Their rather humble website is at www.lovely.com, and really tells only a small part of their story. For someone exploring American new music for the first time, they make a very good starting point.
The two recordings under review here cover the spectrum of the catalog. La Barbara’s phenomenal vocal experiments are typical of the almost machine-like experimentalism, the fascination with sound and sound production itself, that one finds in works by Lovely artists like Alvin Lucier. Humbert’s “chanson” collection, on the other hand, is typical of the sometimes wildly humorous side, which owes a debt to pop music and experimental poetry.
The Humbert CD — 14 “chansons” in total — brings together such well respected new music artists as Lucier, David Rosenboom, Larry Polansky, James Tenney, and Robert Ashley. Overall there is a certain naivety to the recording (which only once or twice brings the level below the usual Lovely standard), but it there are many endearing moments. By far the best track is “Mosquitolove” by Sam Ashley, a humming and buzzing testament to our prickly friend, which makes perfect use of electronics and voice. Perhaps the most important aspect of the CD is the treatment of Humbert’s charming voice, so nicely done in Sam Ashley’s work, which is often fed through electronic devices in not unpleasant forms of manipulation. No doubt synthetic voices are here to stay. This CD gives an interesting spin, certainly with humor attached.
The La Barbara double CD is nothing short of incredible. I think it is a reissue of an earlier lp, but nothing indicates so on the CD jacket, and thus these are probably tracks that have lain fallow in someone’s archive. It is simply one of the best examples of the new vocalism, with or without electronics. La Barbara relies upon her quite incredible native vocal technique. How to describe it? The “Queen of Night” meets Tibetan chanting monks doing Olympic style vocal calisthenics — that does not come even close to describing it.
Rarely will I recommend a CD as a must buy. But I do this one. You may not find La Barbara’s work attractive (“pretty” in the sense of Humbert’s vocal work). But I will not brook any dispute: this is the most remarkable of vocal techniques. And when combined with a conception of music as quasi-meditation, quasi-athleticism, it far exceeds any other forays into new vocal music that I am aware of. The very highest of recommendations. Recommended for a quiet room, under headphones, and in a state of relaxation. Oh, and with seatbelt firmly secured.
Murray Dineen
University of Ottawa