Sound and picture are excellent for both, and the performances, while not first-class, feature solid singing and tasteful productions. Despite those merits, neither DVD makes for a truly satisfying experience. Verdi’s early hit should be more exciting; Bellini’s take on the tragedy of Romeo and Juliet could use more style. The catalog doesn’t exactly run over with these two titles, on the other hand.
As seems to be typical of most of the productions Dynamic chooses to film, the sets tend to the spartan – neither of these have much scenery or even props. The budget, apparently, goes to costumes. For *Ernani*, Pier’Alli’s gorgeous designs put the ladies in satins of metallic red and gold, while the men wear form-fitting tunics of coordinating leather. Beautiful to look at, they also inhibit easy movement, as well as expressing much more of the creator’s taste and imagination than anything about the drama or the characters.
Not helping matters is a cast of strong voices but little stage personality. In the heroic tenor lead, Marco Berti manages the notes with an able but colorless instrument. If he sang with greater individuality, perhaps your reviewer wouldn’t mind so much his bland appearance and stiff stage deportment. Susan Neves shows a little more life as the love interest, Elvira, but why she inspires such mad lust from every man who sees her remains a riddle. Her singing is unsubtle but when she pours out the volume, she makes some impressive sounds. Carlo Guelfi and Giacomo Prestia, as the dark-voiced “bad guys,” Don Carlo and Silva respectively, growl and bluster appropriately. Pier-Alli really needed to spend a little less time with the needle and thread and more getting some inspired movement on stage. The elemental passions of this early Verdi work are done no favors here. Conductor Antonello Allemandi has the right ideas, however, in the pit with the Parma forces.
[ 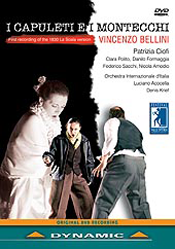 ](http://www.arkivmusic.com/classical/Drilldown?name_id1=888&name_role1=1&comp_id=46280&genre=33&bcorder=195&label_id=7155)For the Bellini, director/designer Denis Knef decided to update the tale of the star-crossed lovers to some vaguely early 20-th century setting. The unchanging backdrop of worn stone edifices suggests a plaza in Verona. The men wear caps and fedoras, with dark suits, and some carry rifles. The aim simply seems to be to put a fresh spin on the timeless tale (albeit one told with some key differences from Shakespeare’s version). In the end, the updating is harmless but meaningless. Bellini’s music never quite reaches the heights of his masterpieces, with only the last scene really touching deeper emotional levels. Nonetheless, the two leads, including a mezzo in the pants-role of Romeo, get many opportunities to shine, and both Patrizia Ciofi (Juliet) and Clara Polito (Romeo) make the most of them. As the tenor bad guy Tebaldo, Danilo Formaggio impresses with a handsome, sizeable mid-range and able top. It’s unfortunate to note that if he were better looking, he might have a lot more opportunity to expand his career. Luciano Acocella and the Orchestra Internazioale d’Italia support the singers admirably.
Perhaps if director/designers had been switched, we could have had a rougher, more scintillating *Ernani* and a lusher, more entrancing *I Capuletti e I Montecchi*. What we have instead is decent but not all that exciting.
Chris Mullins