Dutch conductor Lawrence Renes’ seascapes were deeply and powerfully drawn, his battle was monumental, his moral confusion was terrifying, his defeat was shattering. His orchestra was an aggressive, present player in the telling of Melville’s parable. Britten’s score in this conductor’s hands proves that Billy Budd’s story is not at all as simple as it seems and that its lesson is so bleak and huge that it demands the protection of high art to be borne.
The War Memorial Opera House was built before architectural acoustics was a science. Its acoustic can be mushy and quirky. But for this Billy Budd the San Francisco Opera Orchestra somehow clearly projected the beauty of Britten’s moral ideal of handsomeness in a stunning display of colors and volumes and textures. The diction of the opera’s protagonists was crystal clear, every word was fully understandable in the hyper British-like sounds of careful musical diction. It was a remarkable feat. 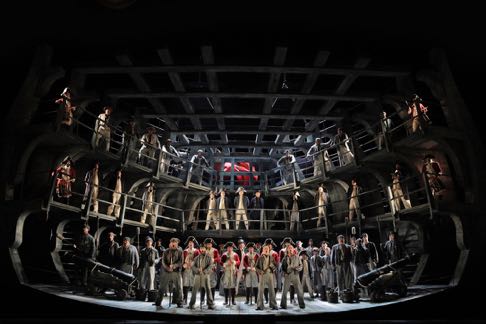 This was the 2010 production from Glyndebourne by British theater director Michael Grandage and his designer Christopher Oram, seen at the Brooklyn Academy in 2014 to great acclaim. The set is the exaggerated super structure of a British man-of-war called the Indomitable. It is the world of 40 male San Francisco Opera choristers impressed into service as its crew, along with 15 or so more sailers who have names, plus the ship’s captain and his officers and a number of Ship’s Boys.
These 80 inhabitants of the Indomitable populate its globe-shaped world from which no one will escape, not even Billy Budd who, in death, remains alive as the embodiment of a critical enigma of our existence — can good and beauty actually exist in this world? The Grandage production implies that no, it cannot. At the end of the opera the Indomitable’s captain, the now old Starry Vere, the Indomitable’s moral conscience, stands alone on the stage. He continues pondering the enigma as he has since the moment Billy Budd was hung. He looks us straight in the face to tell us that he could have saved Billy Budd but did not. Black out.
Like Peter Grimes and Aschenbach (Death in Venice) the Indomitable’s Captain Vere is a tenor. But here tenor William Burden’s voice is neither heroic nor is it cerebral. Mr. Burden is a fine singer and actor who does not project force of personality. This allows us to perceive Captain Vere as an abstract player in a moral drama, not as an individual man in the throes of crisis. His most telling moment was when he prepared himself to tell Billy that he will be hung. He stood alone in white light, lost within his dilemma, his voice taking on unexpected new beauty, determining the tragic irony that Billy’s goodness must be destroyed.
John Claggart, the Indomitable’s master-at-arms (policeman) was sung by bass Christian Van Horn. Mr. Van Horn is of towering height and is a fine actor of beautiful voice. This Claggart was not a tormented, sexually disturbed character (though his response to Billy is sexually charged) but a towering force of order who must bow to all authority while defeating any threat of enlightenment that might challenge that authority. The handsome beauty, the spiritual freedom of Billy Budd had to be destroyed by any means possible as it awakened enlightenment — perhaps in the master-at-arms himself, and certainly in the seamen. 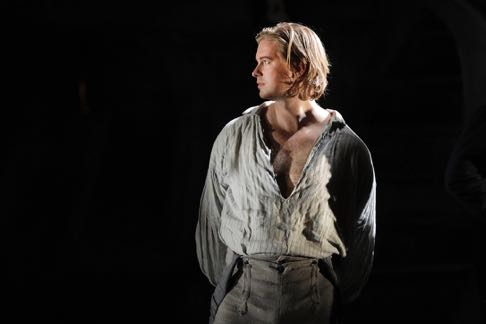 Billy Budd was sung by baritone John Chest. Mr. Chest possesses a focused dark and beautiful voice. He is of small stature and wily. Of the three principals (Vere, Claggart and Budd) he is the one who becomes the real, suffering human being. He finds a surpassing human sympathy for his fellow men in his very moving death vigil, though he fails to accept that he cannot be handsome and good. Britten’s opera teaches us that we cannot allow beauty to exist as it may challenge order. We must therefore search for its flaw and seize upon this flaw to destroy it. Billy stuttered.
Once Billy is condemned he is led off the stage. We do not see him ascend to the yardarm. He will not be seen as a Christ figure offering salvation. His brute disappearance leaves the world without beauty. Just like Moby Dick who challenges and threatens man, Billy Budd too challenges and threatens men. Both Moby Dick and Billy Budd must be destroyed by the men who cannot control them.
The world of the Indomitable is filled with sailors of lively personalities who serve the purposes of the opera’s protagonists. The San Francisco Opera assembled an excellent, appropriate cast of high level character singers who made the world of the Indomitable an artistically valid setting for this Britten masterpiece.
Michael Milenski
Cast and production information:
Captain Vere: William Burden;†Billy Budd: John Chest;†John Claggart: Christian Van Horn;†Mr. Redburn: Philip Horst;†Mr. Flint: Wayne Tigges;†Mr. Ratcliffe: Christian Pursell;†Red Whiskers: Robert Brubaker;†Novice: Brenton Ryan; Maintop; Christopher Colmenero;†Squeak: Matthew O’Neill;†Donald: John Brancy;†Bosun: Edward Nelson;†First Mate: Sidney Outlaw;†Second Mate: Kenneth Overton;†Novice’s Friend: Eugene Villanueva;†Dansker: Philip Skinner;†Midshipman: Talinn Hatt;†Midshipman: Marvin B. Valdez;†Midshipman: Curtis Resnick;†Midshipman: Lucas Willcuts;†Cabin Boy: Benjamin Drever;†Arthur Jones: Hadleigh Adams. The San Franciscco Opera Orchestra and Male Chorus, members of the Ragazzi Boys Chorus. Conductor: Lawrence Renes;†Production: Michael Grandage;†Revival Stage Director: Ian Rutherford;†Production Designer: Christopher Oram;†Original Lighting Designer: Paule Constable;†Revival Lighting Designer: David Manion. War Memorial Opera House, San Francisco, September 20, 2019.