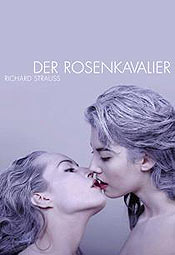 Der Rosenkavalier (Artwork: Gottfried Helnwein)
Out of his Schell
Actor Maximilian Schell brings a new, exacting sensibility to L.A. Opera staging of ‘Der Rosenkavalier’
By David Mermelstein [U-Daily News, 24 May 05]
Tuesday, May 24, 2005 – Comparing Maximilian Schell to one of those purportedly extinct jungle species makes perfect sense. Those who have never observed Schell working will be forgiven doubting the continued existence of such a creature. And those who have are unlikely ever to forget it.
The Vienna-born Schell is best-known to Americans as a film actor. He won an Oscar as best actor in 1962 for playing an attorney defending Nazi war criminals in Stanley Kramer’s “Judgment at Nuremburg,” and the Academy nominated him twice more in the 1970s, for “The Man in the Glass Booth” and “Julia.”
Click here for remainder of article.