Setting: A room in the house of the Maestro.

Count Opizio orders a new opera to be written within the space of four
days. The composer has already turned out the score, but the poet, suffering
from deadline pressure, must adapt his verses to the existing music.
Eleonora, the prima donna hired for the opera by the Count, enters and
delivers a sample of her vocal artistry. Together with the Poet and the
Maestro, she acts out a scene from Giuseppe Sarti’s Giulio Sabino
that devolves into a grotesque parody. Eleonora exits, and the librettist and
the composer wrestle with the problem of writing a new text for the existing
music or producing music for an existing text. A lengthy dispute ensues.
Tonina, representing opera buffa, enters and demands a role
in the new opera. The composer and the librettist quickly concoct a vocal
number for her. A quarrel then erupts between the two singers as to which of
them should sing the opera’s opening aria. The scene culminates in having
both sing their arias simultaneously. The composer and the librettist are
able to pacify the two ladies by agreeing to a juxtaposition of the
seria and buffa styles, thereby putting a conciliatory end
to their quarrel. 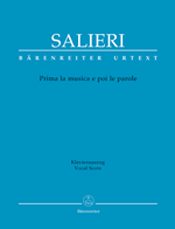