Music composed by Hector Berlioz. Libretto by the composer based on
Virgil’s Aeneid.

The Trojans are rejoicing that the Greeks have departed after 10 years of
war and they prepare to drag into the city the great wooden horse which the
Greeks have left behind.

Cassandre alone, daughter of King Priam, gifted with prophecy, fears the
fall of Troy. She knows that her marriage to ChorËbe is doomed, and grieves
that he thinks she has lost her mind since, along with the gift of prophecy,
she carries the curse of never being believed. ChorËbe urges her to join the
rejoicing, while she begs him to leave her and the doomed city before it is
too late, but he refuses.

The royal family of Troy joins the people in thanking the gods for their
deliverance. They are interrupted by …nÈe with strange tidings of the fate
of the priest Laocon who, fearing Greeks bearing gifts, had been trying to
urge the people to destroy the wooden horse when two serpents had emerged
from the sea and devoured him.

Fearing the wrath of the gods who, it is concluded, must have punished
Laocon for sacrilege, Priam orders the horse to be taken into Troy at once
and the people prepare to make offerings to appease the gods. Cassandre
watches, helpless, crying out that the city is doomed.

Tableau 1. A room in the palace of …nÈe

The ghost of Hector warns …nÈe to flee the city and take the gods of
Troy to Italy, where he is destined to found a great nation. The priest
PanthÈe runs in wounded, carrying the sacred images, with the news that the
Greeks have burst out of the horse and are destroying the city. King Priam is
dead. They prepare to fight, joined by Ascagne, the young son of …nÈe, and
ChorËbe.

Tableau 2. A room in Priam’s palace

Cassandre tells the praying Trojan women that …nÈe will escape and found
a new Troy in Italy. ChorËbe is dead and she prepares to kill herself and
exhorts the women to join her. As the Greeks burst in Cassandre and the women
kill themselves.

A hall in the palace of Didon in Carthage

Surrounded by her people Didon celebrates the seventh anniversary of the
founding of Carthage ó after her husband had been killed she and her people
had been forced to flee from their home in Tyre. Her sister Anna tries to
encourage her to think of loving again; but she calls down a curse on herself
if she is ever false to the memory of her husband, symbolised for her by his
ring which she wears.

The poet Iopas announces the arrival of storm-tossed travellers seeking
refuge, which she grants in memory of her own trials. n»e is disguised as a
sailor and it is Ascagne who asks for asylum, offering the riches of Troy in
return. PanthÈe tells Didon their leader is …nÈe, whose destiny it is to
find a glorious death in Italy, and she welcomes the Trojans.

Didon’s minister Narbal brings news that Iarbas, fierce king of the
Numidians, whose suit had been refused by Dido, is attacking Carthage, which
is not strong enough to withstand him. …nÈe throws off his disguise and
offers assistance. He leaves Ascagne in Didon’s protection as he prepares to
lead the Carthaginians into battle.

The pantomime of the royal hunt and storm, with the word Italy punctuating
the tumult.

Tableau 2. Didon’s gardens by the sea

Narbal is worried that now that the Numidians have been defeated, Didon no
longer attends to affairs of state, but spends the time hunting and feasting.
When Anna explains that Didon loves …nÈe, he is concerned, knowing that
fate calls …nÈe to Italy. But Anna sees no problem, feeling that …nÈe is
equally bound to Carthage. She is delighted by her sister’s happiness.

Didon, …nÈe and other Trojans appear and are entertained by songs and
ballets, but Didon dismisses them and asks Iopas for something simpler. He
sings a hymn to the goddess Ceres, but even that Didon finds not to her
taste.

She asks …nÈe to tell her of the fate of Andromache, widow of Hector and
is horrified to learn that Andromache has married her captor Pyrrhus, who had
killed Priam and whose father Achilles had killed her husband Hector; but
Didon also feels in some way absolved for her own love for …nÈe.

Unheeded by her, Ascagne playfully removes her former husband’s ring from
her finger. All leave except Didon and …nÈe, who confess and consummate
their love. As they leave the moonlit garden the god Mercury appears, strikes
the shield of …nÈe and shouts “Italy!”

Hylas, a young Trojan sailor, sings of his lost homeland as he falls
asleep. 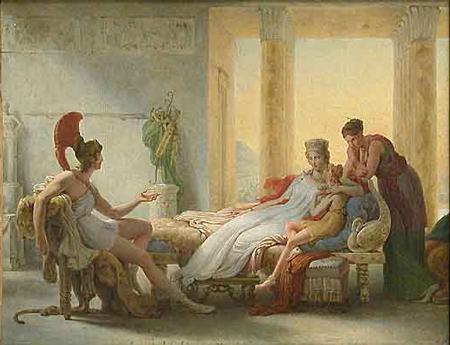 PanthÈe and other Trojan leaders prepare to leave: the ghosts of Hector
and other dead Trojans have been seen along with other portents warning them
they must be on their way. They expect that …nÈe will be strong minded and
leave Didon. Two Trojan sentries have no desire to leave, having found girls
and comfort in Carthage. …nÈe has told Didon he must go. Though grieved by
her suffering, he remains firm in his resolve and prepares to bid her a last
farewell, his resolve being strengthened by the appearance of the Trojan
ghosts urging him on to Italy. When he tries to answer Didon’s reproaches
with explanations about his duty, she curses him and his gods.

Tableau 2. A room in Didon’s palace

Didon begs Anna to plead with …nÈe. Anna feels guilt at having
encouraged Didon to love …nÈe, but assures her that he loves her. They
learn that the Trojans have already sailed.

The distraught Didon announces her intention of sacrificing …nÈe’s gifts
as an offering to the gods of the dead, intending to kill herself at the same
time.

Tableau 3. A garden by the sea

The pyre has been built and the offerings placed on it. When the fire is
lit, Didon mounts the pyre and stabs herself.

A vision of the glory of Rome appears, invisible to the bystanders, and
Didon dies, prophesying that Hannibal will avenge the wrongs of Carthage on
the Romans. The Carthaginians curse the race of …nÈe.

Click here
for information on the New Berlioz Edition. 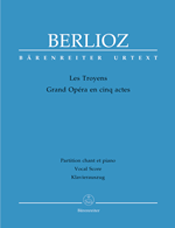