Setting: The city of Iolcos in Thessaly

Synopsis of The Alcestis

The Alcestis was produced in 438 B.C. and is probably the
earliest of nineteen surviving plays of Euripides, unless the Rhesus
is considered genuine. It was the fourth play in the tetralogy which included
The Cretan Woman, Alcmaeon in Psophis, and
Telephus. It is a position, in all other cases that are known, to be
occupied by a satyr play. However, a true satyr play, such as Cyclops, is a
short, slapstick piece characterized by a chorus of satyrs, half men, half
beasts, who act as a farcical backdrop to the traditional mythological heroes
of tragedy. The Alcestis in spite of its position ìis clearly no
such play.î1

It has no satyrs, no openly farcical elements. Even the merriment of
Heracles is toned down to fit the dignity of serious drama. The uniqueness of
the Alcestis is not its happy ending, which was not uncommon in
Greek tragedy, but its positioning within the 438 B.C. tetralogy. Its
relative shortness and fairy-tale like theme which is unusual in extant Greek
tragedy adds to its uniqueness and controversy.

Eurpidesí Alcestis has always been a criticís battlefield.
Even the genre to which the play belongs is disputedóis it a tragedy,
play, or the first example of a tragicocomedy?2

Though the story of the Alcestis appears relatively simple it too
has been the object of study and controversy. It is the story of a young man
who is king. His name is Admetus. Through the trickery of his friend, the god
Apollo, Admetus escapes Thanatos, Death. Apollo, in the prologue of the
Alcestis, laments the situation he has gotten his friend into. He
had persuaded Death to take a substitute for Admetus. It seemed a fine idea
to both Admetus and Apollo, however Death made one stipulation, the
substitute had to be a voluntary one. Admetus, still undisturbed, believed
his elderly parents would lovingly and willingly take his place and die.
Instead, his parents made it clear, especially Pheres, his father, that life
was sweeter and more precious as one got older and his parents had no
intention of dying for him. 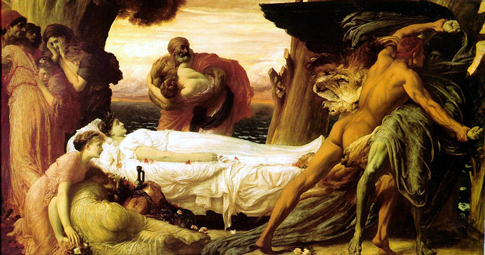 None, except his young beautiful wife and queen came forth. Alcestis
voluntarily places herself in her husbandís stead. Death comes for
Alcestis, leaving her grieving husband to contemplate a life of shame,
promised celibacy and isolation. Now enters Heracles. Heracles sees his
friend in mourning and questions him as to who has died. Admetus assures his
friend that it was simply an outsider and that Heracles was very welcome to
stay. Heracles takes Admetus at his word and begins to party and make merry
as was his custom. Finally, a servant tells Heracles that is is the queen,
Alcestis, that has died. Heracles, angry and hurt confronts Admetus and
learns that this is true. He asks Admetus how he could deceive a friend in
such an embarrassing and cruel way.

Admetus painfully tells Heracles the story. He tells Heracles that he is
sorry for his humiliation but that he did not want to refuse Heracles
hospitality since he felt that hospitality was the only thing left that he
had to give his friend. Heracles not only forgives his friend but feels his
pain in the loss of Alcestis.

Heracles, being the super-hero of those times, goes off to Hades and
wrestles Death for the life of Alcestis. He wins and brings Alcestis back to
Admetus in disguise. It is as if Alcestis is still dead. It is not until
Admetus begins to understand the true pain of his deeds, that the veil drops
from Alcestisí face and her husband recognizes her. And so the happy
ending.

As its genre, the story also poses questions:

Who is the main character, Alcestis or Admetus? And through whose eyes are
we to see this wife and this husband? Is Alcestis as noble as she says she
is? And is Admetus worthy of her devotion, or does he deserve all the blame
his father, Pheres heaps upon him? And is the salvation of Alcestis a true
mystery, a sardonic ëand so they lived happily ever afterí or simply
the convenient end of an entertainment?3

Click here for a synopsis of the opera (in Italian).

Click here for a synopsis of the opera (in German).