Synopsis of PhËdre by Jean Racine based on
Hippolytus by Euripides and
Phaedra by Seneca:

Theseus, king of Athens, has disappeared during one of his expeditions.
Hippolytus tells Theramenes of his intention to search for his father. But
this is not the real reason he wishes to leave Troezen, where the court has
been in residence for some time. Neither does he desire to avoid the
persecution of his stepmother, Phaedra. His only motive is to escape the
charms of Aricia, the only survivor of the royal family who formerly ruled
Athens. He is in love with her, and his father has forbidden her to marry.

Oenone, Phaedra’s nurse, announces her mistress, but Hippolytus wishes to
avoid an unpleasant meeting, and departs. The queen’s behavior, and her
conversation with Oenone, betray her incestuous and forbidden love for
Hippolytus. She wishes for death, but the sudden announcement of Theseus’
death puts a new complexion on things. Free to indulge her passion, she gives
up her suicide plan in order to arrange an alliance with Hippolytus against
Aricia, to preserve her own son’s right to the throne of Athens. 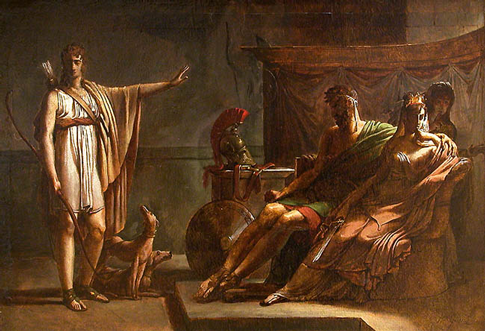 Ismene, Aricia’s confidante, announces Theseus’ death to the young girl
and in the same breath reveals her suspicion of Hippolytus’ romantic feelings
for Aricia. Incredulously the young girl listens to a revelation that
enchants her, since she, in turn, has fallen in love with Hippolytus.
Hippolytus soon confirms the confidante’s speculation in a tender but awkward
confession. The interview is interrupted by the announcement of Phaedra’s
arrival, but not before Aricia has timidly admitted her own feelings.

Phaedra comes in with the purported intention of pleading for her son.
However, carried away by her passion, she forgets her original purpose and
reveals her secret love. Crushed by Hippolytus’ horrified reception of her
declaration, she takes his sword to kill herself. As she rushes out,
Theramenes comes in with a momentous rumor: Theseus may be alive. Hippolytus
decides to investigate the rumor and to fight against Phaedra’s claim to the
throne and in defense of Aricia’s rights.

Phaedra’s confession has had an unexpected result. In spite of her
humiliation, her hopes have been revived and she now urges a reluctant Oenone
to plead her case with Hippolytus. However the situation changes drastically
with the news of Theseus’ return. At first Phaedra, panic-stricken, again
threatens suicide, then yields to Oenone’s perfidious plan to accuse
Hippolytus of attempting to seduce her. When Theseus comes in, Phaedra
departs with a cryptic hint. Hippolytus also leaves with a lame excuse.

At the beginning of the scene, Oenone completes the slanderous accusation
against Hippolytus introduced offstage. The credulous Theseus is completely
deceived. When Hippolytus appears, Theseus wonders indignantly at his son’s
innocent appearance and greets him with immoderate accusations, culminating
in a prayer to Neptune for revenge. Hippolytus, out of filial consideration,
defends himself by pointing out his reputation for virtue and reminding
Theseus of Phaedra’s ancestry, and by confessing his love for Aricia. Theseus
rejects the last argument as a mere ploy. 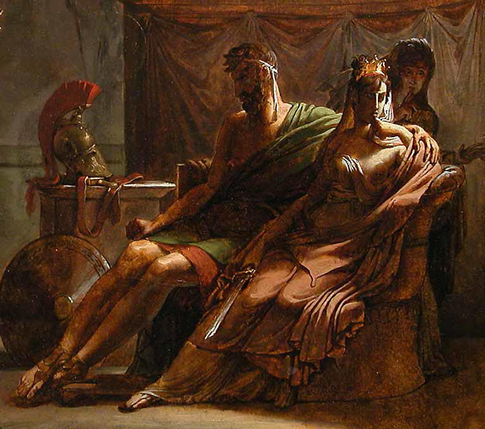 Meanwhile, Phaedra, stricken by remorse, goes to see Theseus to plead for
Hippolytus. But she changes her mind when Theseus unwittingly reveals to her
that she has a successful rival. She becomes hysterical with jealously and
rage. Finally, however, she repents and repudiates Oenone, the instigator and
agent of her treachery.

Still refusing to clear his name, Hippolytus decides to flee but before
leaving, arranges a rendezvous with Aricia so that they may wed. Immediately
after his departure Theseus abruptly appears. In spite of her embarrassment,
Aricia stands up to him and defends Hippolytus’ innocence with such
conviction that the king’s certainty is shaken. He calls for Oenone and is
even more deeply disturbed when a servant reveals Oenone’s suicide and
Phaedra’s irrational behavior. Theseus, at last, is willing to reconsider his
belief in his son’s guilt, but it is too late. Theramenes comes in with the
harrowing tale of Hippolytus’ death. Phaedra arrives and clears Hippolytus,
then dies of the effects of a poison she has taken earlier. Grief-stricken,
Theseus vows to make full amends to his son’s memory and to treat Aricia as
his daughter. [Diana restores Hippolytus to life and reunites the couple.]*