Music composed by NiccolÚ Jommelli (1714-1774). Libretto by Mattia
Verazi, after the libretto, PhaÈton by Philippe Quinault (written
in collaboration with Lully) and Metamorphoses by Ovid.

Climene and the priests of Teti invoke the sea nymph from her sacred cave.
Climene confides her fears regarding the wedding planned by her now deceased
husband between his daughter, Libia, and Climeneís son, Fetonte. King
Epafo, however, has designs upon Libia. Proteo foretells that Fetonte will
threaten humanity.

Libia and Fetonte later learn that Climene has been imprisoned by Epafo,
who will not free her unless Libia agrees to marry him. King Orcane, wishing
to marry Climene, plots with Epafo to arouse the Queenís jealousy.

Having discovered their plans, Climene and Libia confuse Orcane about
their real feelings. Fetonte, on the other hand, becomes disturbed. Climene
announces that she will abdicate the throne in favor of Libia when the girl
marries a child of a god in accordance with the oracleís prophecy. Climene
chooses Fetonte and reveals his divine origin. The rivals, however, challenge
Fetonte to prove his divine nature.

Climene guides Fetonte to Il Sole. To show his true origins, Fetonte will
ask permission to appear in the sky in Il Soleís chariot and to bring
daylight upon the Earth. Libia vainly implores Fetonte to desist.

Il Sole welcomes Fetonte into his palace. Fetonte is instructed of the
danger if he proceeds. Fetonte refuses the protection of La Fortuna.

Meanwhile, Climene is seized by Epafo. Libia is taken under the protection
of Orcane. The two kings prepare for battle. Epafo flees, taking Climene with
him. Fetonte appears in the sky; but, losing control of the chariot, it
appears that he will destroy the Earth. Zeusí intervention is invoked, who
directs lightning at Fetonte. He falls into the sea. Climene, who learns that
Libia is dead, throws herself into the sea to join her sonís fate. 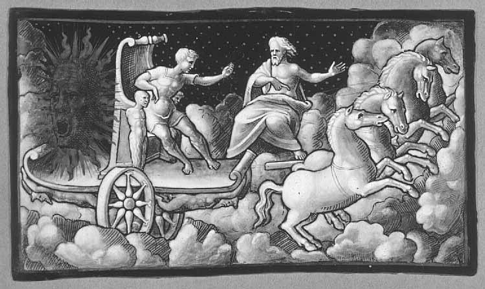