Music composed by Frank Martin. Libretto by the composed based upon William
Shakespeare’s The Tempest as translated by A. W. Schlegel.

The magician Prospero, rightful Duke of Milan, and his daughter, Miranda,
have been stranded for twelve years on an island after Prospero’s jealous
brother Antonio—helped by Alonso, the King of Naples—deposed him
and set him adrift with the then three-year-old Miranda. Gonzalo, the
King’s counsellor, had secretly supplied their boat with plenty of food,
water, clothes and the most-prized books from Prospero’s library.
Possessing magic powers due to his great learning, Prospero is reluctantly
served by a spirit, Ariel, whom Prospero had rescued from a tree in which he
had been trapped by the Algerian witch Sycorax. Prospero maintains
Ariel’s loyalty by repeatedly promising to release the “airy spirit” from
servitude. Sycorax had been banished to this island, and had died before
Prospero’s arrival. Her son, Caliban, a deformed monster and the only
non-spiritual inhabitant before the arrival of Prospero, was initially adopted
and raised by him. He taught Prospero how to survive on the island, while
Prospero and Miranda taught Caliban religion and their own language. Following
Caliban’s attempted rape of Miranda, he had been compelled by Prospero to
serve as the sorcerer’s slave, carrying wood and gathering berries and
“pig nuts” (acorns). In slavery, Caliban has come to view Prospero as a usurper
and has grown to resent him and his daughter. Prospero and Miranda in turn view
Caliban with contempt and disgust.

The play opens as Prospero, having divined that his brother, Antonio, is on
a ship passing close by the island, has raised a tempest which causes the ship
to run aground. Also on the ship are Antonio’s friend and fellow
conspirator, King Alonso of Naples, Alonso’s brother and son (Sebastian
and Ferdinand), and Alonso’s advisor, Gonzalo. All these passengers are
returning from the wedding of Alonso’s daughter Claribel with the King of
Tunis. Prospero, by his spells, contrives to separate the survivors of the
wreck into several groups. Alonso and Ferdinand are separated and believe one
another to be dead. 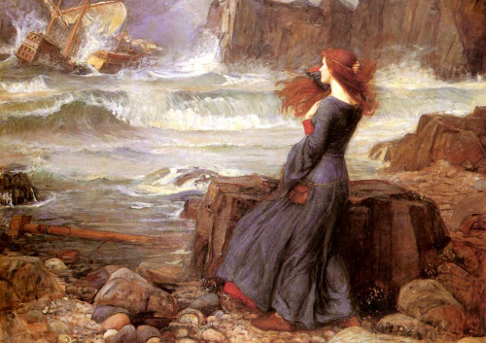 Three plots then alternate through the play. In one, Caliban falls in with
Stephano and Trinculo, two drunkards, whom he believes to have come from the
moon. They attempt to raise a rebellion against Prospero, which ultimately
fails. In another, Prospero works to establish a romantic relationship between
Ferdinand and Miranda; the two fall immediately in love, but Prospero worries
that “too light winning [may] make the prize light”, and compels Ferdinand to
become his servant, pretending that he regards him as a spy. In the third
subplot, Antonio and Sebastian conspire to kill Alonso and Gonzalo so that
Sebastian can become King. They are thwarted by Ariel, at Prospero’s
command. Ariel appears to the “three men of sin” (Alonso, Antonio and
Sebastian) as a harpy, reprimanding them for their betrayal of Prospero.
Prospero manipulates the course of his enemies’ path through the island,
drawing them closer and closer to him.

In the conclusion, all the main characters are brought together before
Prospero, who forgives Alonso. He also forgives Antonio and Sebastian, but
warns them against further betrayal. Ariel is charged to prepare the proper
sailing weather to guide Alonso and his entourage (including Prospero himself
and Miranda) back to the Royal fleet and then to Naples, where Ferdinand and
Miranda will be married. After discharging this task, Ariel will finally be
free. Prospero pardons Caliban, who is sent to prepare Prospero’s cell,
to which Alonso and his party are invited for a final night before their
departure. Prospero indicates that he intends to entertain them with the story
of his life on the island. Prospero has resolved to break and bury his staff,
and “drown” his book of magic, and in his epilogue, shorn of his magic powers,
he invites the audience to set him free from the island with their applause.