*New York City Opera in Talks to Build Its Own Home*
By ROBIN POGREBIN [NY Times]
The New York City Opera is in negotiations to build a new opera house on the site of the former American Red Cross New York headquarters near Lincoln Center, the opera confirmed yesterday. 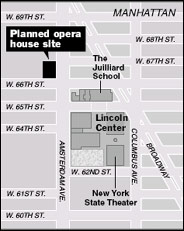 City Opera officials met recently with Amanda M. Burden, the commissioner of the Department of City Planning, who described the project yesterday as if it were all but certain. Also at the meeting were the developer, A. & R. Kalimian Realty, which bought the Red Cross site about 10 days ago for about $72 million, and the architect for the new building, Christian de Portzamparc, who designed the tower on East 57th Street that is home to Louis Vuitton’s North American headquarters.
Paul Kellogg, the opera’s general and artistic director, emphasized that talks were preliminary. “We have been in discussions about this project, as we have about others,” he said. “Nothing has been determined one way or another about this project.”
[Click *here* for remainder of article (free registration required).]