*YOUR RECORDED HERITAGE: Singers in music of Bizet*
by Roger Pines, Editorial Dramaturg, Lyric Opera Chicago
bq. Georges Bizet’s Carmen has a distinguished recording history in both complete performances and excerpts. From this ever-popular work, as well as the composer’s Les pecheurs de perles, there are considerable lessons to be learned from the early decades of recording in terms of balancing dramatic urgency with the needs of the drama. Many singers have gotten by in Bizet with beauty at the expense of text, but a Solange Michel or a Charles Dalmorès demonstrates indisputably that Bizet does not come alive unless the text is commanded in depth.

*Sopranos*
At the turn of the century, Carmen’s title role was sung nearly as frequently by sopranos as by mezzos. The most famous Carmen of the 1890s was a soprano, *Emma Calvé* (1858-1942), whose stage repertoire ranged from Cavalleria’s Santuzza to Hamlet’s Ophélie! Listening to her Carmen today, we’re aware of extraordinary liberties of phrasing. At the same time, Calvé projects a personality of overwhelming charm and appeal – not for nothing was her name synonymous with Carmen for an entire generation of operagoers.
Carmen was first recorded complete in 1908, in German. The first complete French-language recording was made four years later with a dramatic soprano, *Marguerite Merentié*, (1880 – ? ). She was a Tosca, a Brünnhilde, but completely at ease with Carmen’s music. One finds a significantly more restrained presentation than with Calvé, yet the characterization comes to life. The dialogue is included in her recording, and she makes the most of it.
Of the many available versions of Le&iumlautla’s aria from Pecheurs recorded pre-1950, few now available are by French sopranos. An exception is the performance of the uniquely versatile *Ninon Vallin* (1886-1961), who also recorded the arias of both Carmen and Micaela (her stage repertoire included both roles). One learns something from every Vallin recording, for she is elegant musicality personified and her performances have an astute sense of proportion. Vocally she is immensely enjoyable, possessing a richer, more colorful lower-middle register than any other French lyric soprano of her generation.
*Mezzo-sopranos*
*Conchita Supervia* (1895-1936) was made for Carmen. This Spaniard had a great flair for French texts, and a unique way of “tasting” Carmen’s words so that each inflection remains forever in one’s memory. Like Calvé, the voice exudes vivacity (not surprisingly, she was one of her era’s few outstanding Rossini singers), but the darkness necessary for Carmen is there, too. Supervia’s distinctive vibrato has always been an acquired taste, but one capitulates immediately to her total, phrase-by-phrase involvement in the gypsy’s character.
After Supervia, *Germaine Cernay* (1900-1943) and *Solange Michel* (1912 – ?), both of whom recorded Carmen complete, come as a shock. They may strike listeners as cool to a fault, but beneath the coolness there is also danger. Neither is in any way prone to the exaggeration of which listeners could accuse their predecessor, Calvé, and they do not force the voice at extremes of range as one hears so often with today’s Carmens. Their subtle way with the text is a joy in itself, and they each have the right Carmen timbre, neither too “fruity” nor too light-toned. Michel, by the way, was the Carmen in France during the 1940s and ’50s, singing the role about 700 times.
*Tenors*
Few topflight French – or rather, “francophone” — tenors today can even adequately handle Don José’s music, but there were many 75-100 years ago. A major figure internationally, *Charles Dalmorès* (1871-1939), sang a wide variety of spinto repertoire and was a favorite in both France and America. His timbre did not ravish the ear as did those of his greatest Italian contemporaries, but he had enormous musicality, intelligence, a sense of line to do justice to the Flower Song, and true dramatic intelligence. In later generations came the exciting Corsican *José Luccioni* (1903-1978); Michel’s José on records, the French-Canadian *Raoul Jobin* (1906-1974), a lighter voice than Luccioni who took on all the major “heavy lyric” French parts; and nearly everyone’s French spinto tenor of choice, the manly *Georges Thill* (1897-1984), whose “La fleur” is not currently available, alas.
When it comes to floating Nadir’s aria and any other lightish French tenor aria you can mention, they come no better than *Edmond Clément* (1867-1928); his mastery of floated half-voice is breathtaking. In the great line of tenors in this repertoire, his heirs are Spain’s *Miguel Villabella* (1892-1954), a tenor of seemingly unlimited top voice, with near-native timbre and diction; and one of Canada’s greatest gifts to singing, silver-voiced *Léopold Simoneau* (1918 – ), who was just as renowned in Mozart as in French roles.
*Baritones and Basses*
The Toreador Song is not a piece we hear today with the degree of elegance that would have been expected of any French baritone singing this music a century ago. A genuine vocal aristocrat was *Henri Albers* (1866-1925), a Flemish artist who established himself in France. Albers, who sang Escamillo in the complete recording with Merentié, had an extraordinarily assured technique, and did not emphasize the toreador’s machismo at the expense of the vocal line.
Other baritones who could do justice to the music of both Escamillo and Zurga were two contemporaries, *Charles Cambon* (1892-1965) and *Jean Borthayre* (1902-1984). The latter had greater intensity of utterance, the former a warmer and even more voluminous instrument. In the next generation, *Gerard Souzay* (1920-2004) was a much lighter voice than those two, but his is nevertheless a passionately convincing interpretation of Zurga’s aria. Thanks to a very large range, the sumptuous-voiced bass *Marcel Journet* (1867-1933) was able to take on the duet with Nadir in a memorable performance opposite Clément.
By far the best-known number from Bizet’s La jolie fille de Perth is Ralph’s drinking song, “Quand la flamme de l’amour,” which many French singers have recorded brilliantly. One of the first was bass-baritone *Jean-Francois Delmas* (1861-1933), an imposing figure with vocal amplitude to match. The creator of Athanael in Massenet’s Tha&iumlauts and the first to sing four major Wagner parts at the Paris Opéra, Delmas possessed a degree of vocal grandeur that one can appreciate even in primitive turn-of-the-century recorded sound.
*Essential Recordings*

*This article originally appeared in Voices, OPERA America’s official bulletin for singers, and is reproduced here by permission of OPERA America.*
*Opera Today 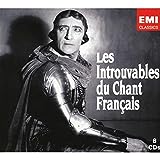