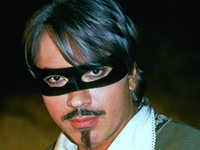 Mozart’s Don Giovanni is arguably one of his most complex, politically controversial, and forward-thinking operas. It’s no wonder that many music students and opera buffs place such a heavy emphasis on this opera as they grasp the genre. Yet, rather than faithfully presenting this operatic masterwork, *Bullfrog Films* has produced a new twist, Don Giovanni: Leporello’s Revenge with the imaginative artistic vision of director Barbara Willis Sweete.
Leporello begins in a 1930’s Hollywood screening room declaring before the opera cast his wish to be a gentleman and no longer a servant, singing the opening lines of “Notte E Giorno Faticar.” Leporello gets his wish, appearing as the star, Don Giovanni, in his black and white film playing on the screen behind him. As Giovanni, he plays the first scenes masked, concealing his true identity to the cast watching the film. Yet in the famous scene where the couples find Leporello in the garden disguised as Giovanni, the truth is known that Giovanni is Leporello! His fate of truly becoming his master is realized when the unrepentant Giovanni falls into the fiery pits of hell, and Leporello is pulled down with him.
Sweete’s vision “…alludes to the notion that the Don and his servant are alter-egos, opposite sides of the same person”. Using the film medium, she is able to fuse both roles of Don Giovanni and Leporello into a single performance, which is impossible live given the difficulties for singer and director.
Russian baritone Dmitri Hvorostovsky takes on the almost unattainable quest to meld the characters of Giovanni and Leporello, supported by Richard Bradshaw, general director of the Canadian Opera Company, and a Canadian cast consisting of Dominique Labelle (Donna Anna), Gary Relyea (Commendatore), Liesel Fedkenheuer (Donna Elvira), Michael Colvin (Ottavio), Krisztina Szabo (Zerlina), and Alain Coulombe (Masetto).
Leporello’s Revenge is a provocative take on an operatic masterpiece, infusing unprecedented intrigue and suspense into a time-honored classic. Whether you’re an opera buff or an uninitiated student, brush up on your opera history, sit back and get ready for an adventure!
Sarah Hoffman