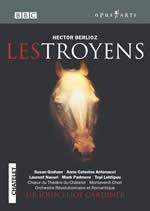 Susan Graham, Gregory Kunde, Anna Caterina Antonacci, Renata Pokupic, Ludovic Tézier, Laurent Naouri, Nicholas Testé, Mark Padmore, Topi Lehtipuu, Stéphanie d’Oustrac.
Monteverdi Choir & Choeur du Théâtre du Châtelet, Orchestre Révolutionnaire et Romantique, Sir John Eliot Gardiner, conductor.
BBC Opus Arte, 3 DVD
For the last couple of decades, the “concept production” has been a controversial presence on opera stages, generally director-driven and decried by traditionalists as detracting from the essence of opera which they define as “voice, voice, voice.” Here’s a refreshing and overdue variant, a production concept that is conductor-driven, devoted to rethinking the sound and casting principle appropriate for French grand opera by starting at the top with the grandest of them all.
The point is often made that we now lack heroic voices for the great works. John Eliot Gardiner’s casting argues, rather convincingly I think, that “heroic” is a concept relative to an opera’s overall style and the period in which it was written. He casts in the French tradition that knows the difference between a German heldentenor whose strength lies in the middle and bottom of the voice, and a French heroic tenor, of whom is demanded a free and brilliant top and the ability to soar over ensembles with precisely focused tone. Many in this cast are associated with music of the Renaissance, Baroque and early nineteenth century. Their voices are clearer and lighter than we have become accustomed to in Les Troyens and Gardiner surrounds them with a chorus that can not only move and act with distinction, but whose voices in ensemble have the required buoyancy, flexibility and brilliance for Berlioz’s demanding choral writing.
Yannis Kokkos (director, set and costume designer) provides an updated but otherwise traditionally narrative production. The costumes are a stylized take on early nineteenth century with excursions into contemporary fatigues for the invading Greeks and slacks for the widow-queen Didon. The monumental sets contrast Trojan encirclement and claustrophobia with Carthaginian rationality and light. Kokkos doesn’t solve the entry of the horse into Troy (here a disembodied floating horse head a la Georgia O’Keefe) any more successfully than most of his colleagues. He does, however, move his crowds with exciting dramatic point and develops memorable characters with his singers.
Part one, “La Prise de Troie,” is dominated by Anna Caterina Antonacci in one of two almost literally demented performances in this production. The Italian soprano’s fearless vocal attack and strikingly tortured physicality illuminate Cassandre’s personal tragedy as well as the fear with which her people regard her. Antonacci’s is not a perfect voice, but it is a highly expressive voice, a theatrical voice that is strong in all registers with the text placed well forward on the tone in the French manner. In “Les Troyens a Carthage,” Susan Graham builds Didon’s character from the inner emptiness of grief through burgeoning love to a shattering climax of titanic rage, and suicidal depression when abandoned by énée. Graham’s extended mad scene is stunningly sustained, voiced with daring to the point of a rasp on the tone for dramatic effect. She then rises to Didon’s final prophetic utterances, capping her performance with pure gleaming tone. Throughout, her creamy mezzo and handsome figure are perfect for Didon, and she receives a huge ovation from the Parisian audience.
For énée, the hero who spans both parts of Les Troyens, Gardiner has Gregory Kunde in what is surely the most controversial piece of casting here. Kunde became noted for high-lying lyric tenor heroes in Rossini, Donizetti and Bellini. Some recent New York performances (notably Rossini’s Ermione at N.Y. City Opera) have revealed signs of wear and tear on his medium-weight tenor. For this Troyens, however, he sounds secure, the top encompassing énée’s high lying lines with minimal strain. Exactly how well this voice carries over the orchestra in a mid-sized house like the Châtelet is hard to tell given the obviously mediated sound. I will say that while Kunde really nails énée’s treacherous opening description of Laocoon’s death, the final lines are mostly submerged in the orchestra. Kunde’s best work, and a highlight of the performance in general, is the great “Nuit d’ivresse” love duet with Susan Graham.
The large supporting cast mostly justifies Gardiner’s approach very well. Ludovic Tézier is handsome of voice and face as Chorèbe. Petite Stéphanie d’Oustrac is striking physically and wields an unexpectedly contraltoish sound as Ascagne. Tenors Marc Padmore (Iopas) and Topi Lehtipuu (Hylas) bring lovely voices to their lyrical solos, while Renata Pokupic’s Anna blends exquisitely in duets with Graham, even if she doesn’t make a particularly big impression in the rest of the role. Laurent Naouri comes in and out of focus vocally as Narbal.
Gardiner leads his period orchestra in a dynamic performance and supports his singers well. In the interest of total authenticity, he sought out a private collection of Saxhorns that were current in Parisian orchestras of the period, providing a mellow alternative to some of the more aggressive modern heavy brass. Although no mention is made on the case or in the print notes, the interview with Gardiner after the opera on disc 3 reveals the origin of the unfamiliar ending employed for this production. After Dido’s death and the chorus’s furious insults to the departing Trojans, Anna Caterina Antonacci, now as the mythical Clio but still a prophetess, enters to deliver a line in Latin that what was once Troy will now be Rome. This moment is a fragment of Berlioz’s original ending as restored in a new critical edition by Hugh McDonald. Why Gardiner chose to introduce this potentially interesting material to the world in such truncated form is not explained, even by the conductor himself.
Whether or not you buy Gardiner’s vision of an “authentic” modern Les Troyens with voices less dramatic than we have become used to, the performances of Antonacci, Graham, the chorus and orchestra more than justify the cost of this release.
William Fregosi