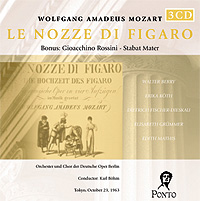 Recorded in Tokyo on October 23, 1963, this live recording of Nozze di Figaro boasts fine sound, a top cast, and the leadership of a conductor of great skill and experience. The label, Ponto, has joined the ranks of such other companies as Opera D’oro and Gala in making available broadcast and in-house recordings at affordable prices. Sometimes these releases are not even worth the modest price asked for; this one may well have more to offer than higher-priced studio sets.
After a slightly hesitant first few moments, the sound quality settles down and becomes admirably strong and well defined. There is relatively little stage noise, the voices have a natural presence without being too forwardly placed, and Böhm’s orchestral control can be relished. His may be an old-fashioned reading, but it never lags or lacks for humor or beauty. The audience can be heard laughing from time to time at the stage antics; applause only interferes with the musical pleasures at the end of Non piu andrai, when unrestrained clapping covers a bit of Böhm’s ironically happy martial send-off.
Tokyo delighted in a first-rank cast. Elisabeth Grümmer’s Countess seems to be Ponto’s focus; she is also the soprano soloist in the Rossini Stabat Mater, which comes as a bonus on disc three. In her early 50s at the time of the performance, she retains ample vocal beauty while offering a mature edge to her sadness as well. Her unfaithful spouse, the Count, is Dietrich Fischer-Dieskau, who went on to record the role under Böhm for Deutsche Grammophon. In 1963 his voice is in its prime, and there is not much of the over-emphatic delivery sometimes found in his later work.
Walter Berry’s Figaro under Böhm is also available on DVD in a recently released 1966 Salzburg festival performance. Berry and his Susanna, Erika Köth, have a warm vocal chemistry. Some may find Köth’s Susanna a little too chirpy, but that very quality also suggests the type of cheerful, pretty Susanna that would very likely have attracted the Count.
Edith Mathis is a very feminine sounding Cherubino; as a matter of fact, she went on to sing Susanna under Böhm for the DG recording. Such a pretty voice may not work for every listener, but purely as singing, Mathis’s Cherubino has much pleasure to offer.
This set can be recommended highly to all lovers of the opera, and it might even make converts of those who have found the studio sets lacking in the energy and joy often found in live performances.
As mentioned, disc three is filled out with a 1953 mono performance of Rossini’s Stabat Mater, with Grümmer in fresher voice. The other soloists are capable but unremarkable. Walther Ludwig’s rather heavy tenor makes for a rather lugubrious Cujus animan, and neither bass Helmuth Fehn or contralto Maria von Ilosvay do much to distinguish themselves.
Still, the Rossini is a “bonus,” and the lively, joyous Figaro makes this Ponto release cherishable enough for any opera lover.
Chris Mullins