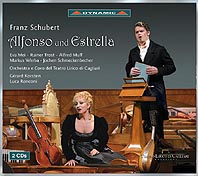 New artists are taking greater chances with repertory, looking for niches to call their own. Dawn Upshaw explores new music, Cecilia Bartoli eighteenth-century Italian song, and in this live recording up-and-coming artists Eva Mei and Rainer Trost take on the lead roles in Schubert’s Alfonso und Estrella. Mei and Trost’s sympathetic singing with the orchestra and chorus of the Teatro lirico di Cagliari conducted by Gérard Korsten breathes life into this choppy opera, which Liszt famously condemned as a work of only historical interest.
Long a source of head scratching for music historians, Schubert operas remain relatively unloved and unheard. He composed three operas, six singspiele, incidental music to Rosamunde, and a three-act melodrama, Die Zauberharfe, some of which were never completed. The master of the song found little success in the aria. Arguably, Schubert was best suited for the miniature, songs and piano works, while he was not at the top of his game in opera and the symphony — a bit like Paul Simon and his Caveman. While their songs abound in nuance, their theatrical works lack drama.
Schubert composed Alfonso und Estrella during the autumn of 1821, with a libretto by Franz von Schober, his friend, jack-of-all-trades, and no Da Ponte. They toiled together happily during a getaway to St. Pölten, outside Vienna. On their return they could not find a theater to perform the three-act opera about young love overcoming warring factions. Famous singers, including Anna Milder-Hauptmann, gingerly avoided the project, while Michael Vogl openly knocked it.
Soprano Eva Mei is no stranger to Rossini, Schubert’s popular contemporary. She has triumphed in La cambiale di matrimonio and Il barbiere di Siviglia. In addition, she has delighted audiences on stage in Beethoven’s Missa Solemnis and Strauss’s Four Last Songs. Trost is best known for his delectable Mozart, (Don Ottavio, Tito and Tamino), showing promise singing at the Met and Covent Garden.
Together their voices bring to light the most convincing numbers in Alfonso und Estrella. After a dullish overture, songs and recitatives, and intrusive choruses, we are treated to the lovely aria O wenn ich je dir wert gewesen, performed with subtle mastery by Mei. Mei pinches some of the high notes and relishes the low ones. Her capable coloratura is humbled by the fact that Schubert has given her few songs to sing that the chorus does not barge in on. Her musicality is highlighted in her ability to blend her voice with Trost’s in the spirited duets that close out Act One. Mei and Trost are also perfectly compatible in the charming duet of Act Two, Lass dir als Erinn’rung zeichen. Trost is given little space to shine in this opera. In the short Wenn ich dich Holde sehe, he completes vocal gymnastics smoothly amid the Viennese trifles. He has a bright tenor voice and like Mei gives an intelligent performance. He also possesses fine vocal control and a gift for timbre.
The other roles are nicely interpreted, particularly Jochen Schmeckenbecher’s majestic baritone as Mauregato. The choir sounds beautifully throughout and the orchestra remains steady in its challenging role as both accompanist and early German vehicle for the drama in this appealing recording.
Nora Beck
Lewis & Clark College