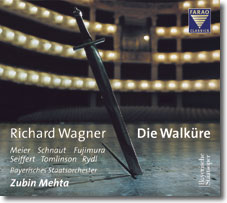 This release documents performances of Richard Wagner’s Die Walküre at the Munich National Theater in July of 2002. The cast includes several contemporary singers well known for their Wagnerian performances, as well as a famous conductor who has enjoyed a long and successful career, both in the concert hall and opera house.
Die Walküre is an opera that has been particularly well served on records, with several outstanding versions derived both from the studio and live performances. Unfortunately, this new Walküre does not stand up well to that formidable competition.
The largest flaw in this enterprise rests with the inability of many of the singers to fulfill Wagner’s admittedly challenging vocal demands. All of the principal singers in this Walküre possess timbres that are basically appropriate for their roles. But most of them also encounter severe difficulties when their voices are under pressure.
The worst offender in this regard is John Tomlinson’s Wotan. From his first entrance, it’s clear that the role taxes the bass to his vocal limits, and perhaps beyond. A fine actor, he certainly understands the role, and attempts to portray it with considerable conviction. But just about anytime Tomlinson is called upon to sing with force in the upper portion of his voice, it threatens to go out of control. Not surprisingly, this flaw becomes more pronounced over the course of this long and demanding opera. As a result, Wotan’s Farewell becomes less a glorious conclusion to a great opera, and more of a failed endurance contest.
In light of Tomlinson’s Wotan, it’s interesting to return to Hans Hotter’s assumption of the role in the legendary London Ring Cycle under Solti. In the twilight of his great career, Hotter was roundly criticized at the time by some for the precarious condition of his voice. And yet, Hotter was far more vocally secure than is Tomlinson in this Munich Walküre. And neither Tomlinson nor just about anyone else for that matter, can begin to match the insight and humanity Hotter brings to this magnificent role.
Likewise, soprano Gabriele Schnaut reveals a pronounced beat in her voice, particularly when the voice is under pressure. She does offer some lovely, committed singing in the Act II dialogue with Siegmund. But any illusion of Brünnhilde as a youthful warrior vanishes whenever Schnaut is called upon to offer heroic singing. Again, the recorded competition, with the likes of such varied and thrilling artists as Flagstad, Traubel, Mödl, Varnay, and Nilsson, is just too strong for this performance to pass muster.
Mezzo Mihoko Fujimara as Fricka is one of the more vocally secure artists in this performance. Still the voice is relatively lightweight, and Fujimara does little, either with the text or vocal coloration, to suggest the power of Fricka’s personality and the strength of her argument against Wotan.
By comparison, Siegmund and Sieglinde fare better. Peter Seiffert has had great success in some of the more lyric Wagnerian tenor roles, such as Lohengrin and Walther. I don’t think Seiffert’s voice is quite so well equipped for Siegmund, however. It lacks the baritonal foundation and heroic ring that the best Siegmunds (Lauritz Melchior above all others) bring to the part. Still, Seiffert sings with great conviction and expression, and overall makes a positive impression. His contribution in the Act II scene with Schnaut’s Brünnhilde is likewise impressive.
Perhaps the best performance comes from Waltraud Meier as Sieglinde. As usual, Meier throws herself completely into the role, both vocally and dramatically. There are some precarious moments, but for the most part she sings with admirable security. And Meier does a masterful job in Act I of portraying the transformation of Sieglinde from repressed wife to passionate lover. Likewise, her contributions in Acts II and III are most compelling. If there is one reason to acquire this set, it is probably for Meier’s Sieglinde.
Kurt Rydl’s Hunding is typical of this performance–a basic vocal quality that is dark and imposing, but marred by a wobble in the upper part of the voice. That flaw, coupled with a lack of dramatic bite, make this Hunding not nearly the menacing figure he should be.
The orchestral contribution under Zubin Mehta’s direction begins admirably, with a brisk storm sequence capped by thundering timpani. Throughout, the Munich National Theater Orchestra plays with tonal warmth and lovely blending of strings, brass, and winds typical of fine European ensembles. But overall, the performance lacks tension and forward momentum. This is due in great part to the absence of crisp articulation. But it is also the result of Mehta’s apparent unwillingness to ratchet up the tempos for such climactic moments as the conclusion to Act I. Everything is played beautifully, but little is played with compelling point or drive. Over time, the results can be numbing.
The recorded sound is quite fine, with excellent balance between the vocalists and orchestra. Some stage noise is apparent, as is the audience response at the conclusion of each act. They seemed to enjoy the performance much more than did I.
Given all of the superb recordings of Die Walküre currently available, I can’t see much call for this new recording, save, perhaps, Meier’s Sieglinde. For those seeking an introduction to this opera, either of the London recordings (Nilsson, Brouwenstijn, Gorr, Vickers, London, Ward, Leinsdorf, conducting; Nilsson, Crespin, Ludwig, King, Hotter, Frick, Solti, conducting) are good places to start. And of course, the legendary Act I recorded in Vienna in 1935 with Melchior and Lehmann, conducted by Bruno Walter is a must. If possible, seek out Stephen Worth’s magical remastering for VIP Records of this classic recording at *www.vintageip.com/records*.
Kenneth H. Meltzer