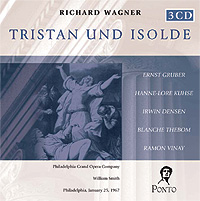 Elsewhere on Opera Today readers can find a recent review of a live recording of Mozart’s Le Nozze di Figaro from the Ponto label, a company that has joined the ranks of Opera D’oro and Gala in offering, at budget price, live recordings of various provenance. At their best, as with that Nozze, these recordings offer in acceptable sound (sometimes better) performances of such quality they rival their more expensive competitors. At less than the best, however, even the budget price becomes exorbitant.
This Tristan und Isolde, recorded on January 25, 1967, unfortunately belongs to the latter category. Unless one has a strong personal reason for wanting a keepsake of this company or the artists involved, the recording is unlikely to please most listeners. The primary reason is the sound. While not unlistenable, the recording is clearly an “in-house” affair, and probably from an audience member, as some of the coughing is more up-front than the singing. Worse, during the climax, some audience members are whispering as Isolde enters the Leibestod. One would love for a Jon Vickers to have been present to yell out, “Stop your damn whispering!”
Of course, true opera fans will put up with poor sound for the sake of an exciting performance. While not an unmitigated disaster, this one does not qualify. Any Tristan und Isolde needs at least one of the two leads to be strong. Here we have the Tristan of Ernst Gruber, whose tenor has a most unpleasant timbre and who sounds more mature than his King Marke (Irwin Densen). Hanne-Lore Kuhse’s Isolde lacks freshness as well, especially in Isolde’s most impassioned outbursts. In some of the softer singing, however, her voice relaxes and some of the tragic glamour of the character appears.
The one cast member of some distinction may attract some interest. Ramon Vinay had left the tenor ranks by 1967, and here he is a most effective Kurwenal. The Brangäne of Blanche Thebom makes no deep impression, especially as she is all but inaudible in her warnings in act two.
Although the murky sound makes orchestral details hard to evaluate, William Smith’s conducting as recorded captures some of the score’s excitement. The score is, unsurprisingly, cut, with each of the last two acts barely making the 60-minute mark.
The booklet features a short history on opera companies in Philadelphia and some biographies of the singers by Andrew Palmer. Supposedly a studio recording of the opera with these two leads had been planned but was cancelled upon the death of the conductor Franz Konwitschny. Perhaps that studio effort would have revealed more of the favorable attributes of the two leads.
Despite some effective passages, overall this set has too many unsatisfactory qualities to be of general interest. If any listeners have more specific interests in these singers or this house, Ponto will have provided them with an affordable addition to their collections.
Chris Mullins