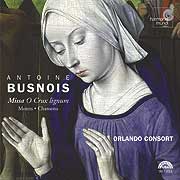 The most recent recording by England’s premier performers of Renaissance vocal music, the Orlando Consort, features a selection of works by the renowned fifteenth-century composer Antoine Busnois, works that represent the major genres of music composition of the time — mass, motet, and chanson. The performances are what we have come to expect from the fine singers of the Orlando Consort: warm, vibrant, and precise.
A relatively few facts are known about Busnois’ biography. Because he was famous enough during his lifetime for the date to have been recorded, we know when he died: November 6, 1492. The circumstances of his birth are less certain; he was probably born around the year 1430, in or near the small town of Busne (hence, “Busnois”) in north-eastern France. From pay records — and from the text of his famous motet In hydraulis — we know that Busnois was a musician in the court of Charles the Bold. Busnois’ reputation as a composer among his contemporaries was exceeded only by that of Ockeghem, with whom Busnois may have studied. Contemporary composers and poets honored Busnois by including his name in a number of texts and poems, among which is Loyset Compère’s motet Omnium bonorum plena, in which Busnois is praised as one of the “masters of song.”
Indeed it is Busnois’ songs that are probably his most original works, despite their adherence to the poetic formes fixes that were cultivated widely during the fifteenth century: rondeau, bergerette, and ballade. Each type of poem features strict patterns of rhyme and syllabic structure that are reflected musically in the alternation and repetition of two principal sections of music. The songs presented by the Orlando Consort represent all three of the major formes fixes and display the subtleness of Busnois’ melodies and the perfection of his counterpoint. Among the chansons included on the recording is a bergerette whose text reveals something about Busnois’ personal life: Ja que li ne s’i attende. This is one of four songs by Busnois whose texts refer directly to Jacqueline d’Hacqueville, the wife of a Parisian councilor, with whom Busnois apparently had a romantic dalliance. In the case of Ja que li ne s’i attende, the first four words of the first line of text (Ja que li ne) together make up the first name of Busnois’ beloved.
The centerpiece of the recording is Busnois’ Missa O Crux lignum, one of only two masses that can be securely attributed to the composer. Busnois’ setting of the five major items of the Catholic mass Ordinary — Kyrie, Gloria, Credo, Sanctus (with a separate track for the Benedictus section), and Agnus — is constructed as a typical cantus firmus mass of the time: The melody of the hymn O Crux lignum is placed in the tenor voice in drawn-out notes, while the other voices weave polyphony around it. The polyphonic mass is truly the most elaborate musical form of the period, with a changing variety of meters, voice pairings, and tempo changes, which enliven the complex polyphonic interaction of the four voices. Busnois’ mass stands out from its contemporaries in its subtle use of imitation to organize the strands of polyphony, and his frequent passages of parallel thirds and sixths to soften its severity.
The fine performances of the Orlando Consort bring to life Busnois’ exquisite music, which has been underrepresented in recent recordings. The close blend of voices in the ensemble is well-suited to Busnois’ complex and subtle pieces.
Deborah Kauffman
University of Northern Colorado