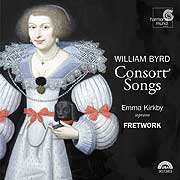 This CD collaboration between the early music viol ensemble Fretwork and vocalist Emma Kirkby is devoted to songs of William Byrd composed in the vernacular to be sung with string accompaniment; interspersed with these is a selection of short instrumental pieces in various genres. As a composer whose work was associated especially with the English Catholics, many of Byrd’s compositions from the last quarter of the sixteenth century were based on sacred Latin texts. The less familiar English consort songs chosen for this recording represent a mix of both secular and religious themes. Topics in the song texts include the constancy of Penelope, the narrative of a pet dog who meets an unexpected end, an elegy on Sir Philip Sidney, and the execution of Mary Stuart as bound up with the vicissitudes of Fortune in this world. This selection is further balanced by vernacular songs of an overtly religious character focusing on topics such as the vanity of earthly pleasure and possessions, the Nativity, and a lengthy prayer for divine grace. Finally, some of the song texts draw on a thematic complex of both sacred and profane.
Among the secular texts several stand out for both their expressive and narrative content. The song “My mistress had a little dog” tells of a pet trained as performer who also hunts after rabbits. Here the interplay of voice and accompaniment is especially effective between Kirkby and the players of Fretwork. In the first of five strophes the little dog’s acrobatic talents are emphasized in Kirkby’s melismatic decorations executed on the words “tumbler” and “might,” in “A tumbler fine that might be seen.” Just as the voice uses embellishment to suggest upward, athletic movements of the dog, the viols can be heard to follow the singer’s decoration or to give their own accompaniment during her long, sustained notes. This technique prepares the listener for additional such decoration in subsequent strophes relating the dog’s history. In the penultimate section the little dog has been slain which is reflected by a change in musical setting. Kirkby modulates her voice to effect a somber tone and the viols play a much slower, dirge-like accompaniment. To underscore the event the soloist focuses her repetitions on the earlier part of the strophe, where the sad news is imparted, and embellishes the word “shake” in imitation of her quivering emotions. The song ends with a call to justice for the slain pet of her mistress.
In their approach to the religious songs Kirkby and Fretwork make use of related techniques. As an example, “He that all earthly pleasure scorns” opposes in two equivalent strophes the vocabulary of sinful life – attracted to riches and “heaps of gold” – and that of the anchoritic existence typical of those saints abandoning this world for blessed solitude. In the first strophe decoration is placed on words such as “sinner” and – increasingly – on “heaps of” gold, as the phrase is repeated and varied. Such embellishment from the first part contrasts with the emphases in the second dealing with a sainted life of renunciation. Here those individuals following the model of Christ “upon the Cross” seek out a life apart from the temptation of possessions, “In woods and fields from men unknown.” The words “upon” and “unknown” in these lines are highlighted with skillfully performed vocal decoration, thus serving as a counterweight to the introductory section on “earthly pleasure.”
The five instrumental selections, spaced more or less evenly between the songs, are drawn from various collections by Byrd, some of which contained originally a mix of vocal and purely instrumental pieces. The three Fantasias, despite the freedom of form often associated with this musical type, show clearly repeating and varied structural elements, some related to dance rhythms. The strength of Fretwork as a period ensemble is reinforced by their performances of these intricate pieces, as well as the dance types represented by the Pavan and Galliard. These selections are an ideal complement to the consort songs, both providing the listener with a rich sampling of William Byrd’s compositional legacy.
Salvatore Calomino
Madison, Wisconsin