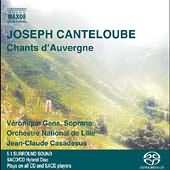 In the mountains of the vast Auvergne country near the south of France lays the inspiration of Canteloube’s Chants d’Auvergne. Marie-Joseph Canteloube, born in 1879 at Annonay, spent his childhood in the countryside of Malaret in the south of Auvergne. It was these roots that instilled his love for folk-music, consuming much of his compositional output and research. He wrote Les chants paysan s’élève bien souvent au niveau de l’art le plus pur, par le sentiment et l’expression, sinon par la forme. (The songs of peasants very often reach the level of the purest art in feeling and expression, if not in form.)
Though Canteloube never achieved outstanding success as a composer, he has become widely known for his folk-song arrangements, particularly for his Chants d’Auvergne for soprano and orchestra. A series of five publications written between 1924 and 1955, partially in fulfillment for his work with the Pétain Government reviving interest in folk-music, these settings suitably recount the original songs, with orchestral accompaniments painting the limitless colors and textures of the Auvergne countryside.
Naxos’ recent recording of Cantaloube’s Chants d’Auvergne featuring soprano Véronique Gens, L’orchestre National de Lille, and maestro Jean-Claude Casadesus, is an exquisite performance, beautifully narrating the diverse vignettes of these song settings. Gens, a French soprano currently specializing in works from the baroque and classical periods, reveals a stunning flexibility. Her interpretation is strikingly simplistic, yet artistically driven, implementing various color timbres, scoops, whoops and flutter, effectively evoking the folk style with depth and breadth. The orchestra successfully supports the atmosphere of these folk-songs with colorful timbres and sensuous phrasing.
Unlike other recordings of Chants d’Auvergne who perform only a few of the popular selections, Naxos includes a broad spectrum of songs that are not as frequently performed or recorded, making it a must for performers and enthusiasts alike.
Sarah Hoffman