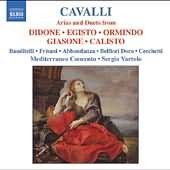 Some years ago, those of us who are aficionados of pre-1750 repertory – and all the more so, those of us who are privileged to be able to teach it – were happy to have any recording of the music we hold so dear. We were happy to excuse wooden-ness or sloppiness of performance because, well, some idea of the sound of pre-Classical repertories was better than none at all. Over the last couple of decades, with the proliferation of phenomenal performers and ensembles who specialize in early music, this resignation faded: we now are spoiled by having our choice of many polished performances, and the privilege of comparing their relative merits.
This is, however, especially true of works by a specific subset of “greats” – Monteverdi Bach Handel Vivaldi. Less-renowned composers are not as reliably represented; and this is certainly the case for Monteverdi’s younger colleague Francesco Cavalli, for whose works we have just a handful of modern recordings. This is why Sergio Vartolo’s project of providing an anthology of “hits” from a cluster of early Cavalli operas is potentially very welcome…
… but alas, it reminds this reviewer of the (bad?) old days. As a teacher, I welcome the resource this collection provides. Cavalli’s works are, indeed, representative of early Venetian opera in a way that Monteverdi’s Coronation of Poppea, though wonderful music, is not; and the notes, though a little rhetorically flamboyant, are solid and even provide information about the manuscript from which the operas are edited (!).
As a musician and fan of seventeenth-century music, however, I am disappointed. One of the most inventive trends in recordings of the repertory of this era over the last decade has been the application of flexible continuo groups – not just harpsichord, but chitarrone, melodic bass-line instruments, harps, guitars. This recording, on the other hand, features an unbroken harpsichord sound – and further, the instrument is rather tinny, and played with little in the way of variety in articulation. The singers are not bad, but their diction is overall really sloppy (and these are all native Italians!) and the inflection of their phrases tends toward the monotonous. As a consequence, the dramatic energy that Vartolo describes as characteristic of Cavalli’s scenes is hard to discern in this recording.
A bright aspect of this compilation are the performances by tenor Mario Cecchetti, far and away the most accomplished and dramatically effective of the singers. The women on the recording are reasonably good if not particularly memorable; baritone Roberto Abbondanza has a relatively generic resonance, and counter-tenor Gianluca Belfiori Doro is especially unconvincing (his voice compares favorably to developing counter-tenor technique of the 1970s and 80s, but pales in comparison to the refinement achieved by many recent virtuosi). The ensemble Mediterraneo Concento – the latest incarnation of an instrumental ensemble that Vartolo has been leading for a number of years – is skilled but a little pedestrian.
Had this recording been issued in 1980, I would have been enthusiastic; given its 2003 release, I am disappointed that Vartolo and his crew – who have put together some very convincing performances of music from the turn of the seventeenth century – didn’t do better. The expressive bar in early music has been raised over the last few years, and this disc doesn’t clear it. Still, I will make sure my university library acquires a copy of this recording, which does give sound to an important and interesting repertory that has been silent for almost four centuries. I’ll just wait eagerly for someone to come along and perform it with a bit more panache.
Andrew Dell’Antonio
The University of Texas at Austin