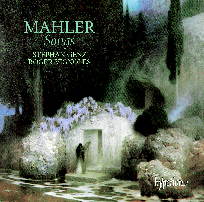 While a number of fine recent recordings of Mahler’s Lieder with orchestral accompaniment have been released in recent years, his songs are also of interest in the versions the composer made for voice and piano. In presenting the songs with piano accompaniment, Stephan Genz and Roger Vignoles bring out details that can become apparent only in this setting. Genz is known for his fine recordings of Lieder, include the award-winning CD of Beethoven’s Songs, as well as various recordings of Hugo Wolf’s Lieder (all on Hyperion). In this recording of Mahler’s music, he performs with Vignoles three complete sets of Lieder, that is, the cycles Lieder eines farhrenden Gesellen and Kindertotenlieder, as well as the set of Fünf Rückert-Lieder and, further, seven selections of settings from Mahler’s early publication of Lieder und Gesänge.
Genz’s approach to Mahler’s early songs, as with his other recordings of Lieder, demonstrates his sensitivity to the text through consistently excellent diction and sense of musical line. In the early song “Hans und Grete,” the articulation of “Ringel, ringel Reih’n!” echoes the accompaniment before proceeding with the principal melodic line; likewise, his enunciation of the exclamation of “Juchhe!” is tastefully controlled and avoids caricature. Yet when the music demands a more extroverted sound, Genz shows a full and solid tone that rings memorably. His exuberant performance of the Wunderhorn setting “Scheiden und Meiden” (which Mahler adapted from “Drei Reiter am Thor”) makes one wonder why other singers have not made as much of this fine song, as well as some of the others selected for this CD.
With the Lieder eines fahrenden Gesellen, Genz and Vignoles work together as if they were performing chamber music. The various emotions depicted in the songs emerge clearly from the performers’ sensitivity to dynamic levels and phrasing. In fact, the ensemble that they create is essential to their engaging interpretation of Mahler’s Kindertotenlieder, which is intense because of the way the vocal line is handed off elegantly to the piano throughout the five songs of this cycle. Vignoles shapes his part as if he himself were singing, such that the lyricism of the first song “Nun will die Sonn’ so hell aufgeh’n” stems from the voice and piano working together. Some passages of “Nun seh’ ich wohl” have a sense of rubato that underscores the text so that it conveys the poetry clearly, without lapsing into shapeless declamation. This stands in contrast to the steady rhythm Genz uses for “Wenn dein Mutterlein,” which benefits from understatement. At the same time, “In diesem Wetter” is notable for the subtlety that makes this final song convincing, as Genz and Vignoles pace the climax of the song and with it, bring the entire cycle, to its poignant conclusion.
For those who know the music, the recordings of the Kindertotenlieder and the Fünf Rückert-Lieder contain nuances that are worth rehearing. “Um Mitternacht” is tellingly triumphant, and “Ich bin der Welt abhanden gekommen” is a notworthy interpretation of which must be one of Mahler’s most familiar songs. In fact, the entirety of this recording bears consideration for the consistently fine interpretations of all the Lieder selected for the CD.
Roger Vignoles contributed some excellent notes to accompany the recording, and his insights into the Lieder are worth reading for their pithy insights into interpreting the songs with piano accompaniment. In addition, the full German texts of all the Lieder are provided, along with translations in English. Vignoles’ notes are translated into both German and French.
James L. Zychowicz
Madison, Wisconsin
Click here for recording details, an excerpt of the sleeve notes and an audio sample.