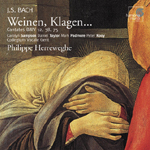 One of the greatest challenges in compiling a recording of J. S. Bach’s cantatas must be choosing which cantatas to group together. For his Harmonia Mundi release, Weinen, Klagen…, Philippe Herreweghe selects three cantatas that represent the human experience of “desolation and comfort.” These two themes are so central to Lutheran theology they could in fact be found in any number of Bach’s cantatas. Nevertheless, the three cantatas on this recording reflect the variety across Bach’s output. “Weinen, Klagen, Sorgen, Zagen” BWV 12, comes from Bach’s period in Weimar, the double cantata, “Die Elend sollen essen” BWV 75, was the first work Bach presented at his new post in Leipzig, and “Aus tiefer Not schrei ich zu dir” BWV 38 is based strictly on the chorale tune throughout the entire work. Despite their differences, all of these works make the theological transition from earthly desolation to eternal comfort.
Avid Bach listeners have favorite performers and interpreters of his works. Some prefer a romantic fuller sound, while another trend embraces single-part speed demons. Philippe Herreweghe helps carry out the resurgence of historically informed performance with this disc, finding clarity and integrity in both music and text without embracing an extreme. His chorus, soloists, and instrumentalists perform as equals within an almost chamber-like ensemble. Herreweghe capably leads this group crafting virtuosic playing and singing into a fresh emotional vision of God’s saving grace from human sorrow.
The soloists on this disc, Carolyn Simpson, Daniel Taylor, Mark Padmore, and Peter Kooy are all early music specialists with a strong handle on Baroque style and practice. Padmore leads the group with his strong tenor and ability to capture the pathos of Bach’s text setting. He contrasts excruciating inflection on the “pain” melismas with an assured conviction of the closing statement of truth in “Sei getreu” of BWV 12. Soprano Carolyn Simpson also demonstrates a sure and flexible voice. Her lucid sixteenth note triplet and thirty-second note runs in the “Ich nehmen mein Leiden” aria of BWV 75 burst with a rapturous, florid joy.
The highlight of this recording is the Collegium Vocale Ghent. The consort of seventeen voices sings with intention and conviction. The sound is full enough to match the colorful timbres of oboes, trombones, and trumpets, but facile enough to negotiate the complex Baroque musical lines. The clear warm tone is equal across all parts helped by the mixture of male and female voices singing alto. From the dripping torment of “Weinen, Klagen, Sorgen, Zagen,” to the empty despair of “Aus tiefer Not,” and the simple confidence of the chorale “Was Gott tut” in both BWV 12 and 75, the chorus easily spans the gamut of human emotions between desolation and comfort.
Adam Luebke