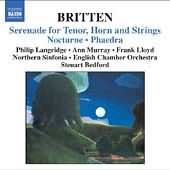 A spare and yet splendid masterpiece, Britten’s Serenade for Tenor, Horn and Strings doesn’t seem to make it into concert halls as often as it deserves. In the recording studio, however, it has fared well. Besides the classic recordings from the composer and his partner Peter Pears, esteemed versions from Anthony Rolfe-Johnson, Robert Tear, Ian Bostridge, and others have a place in the catalogue.
Naxos has resurrected a 1994 release from Collins Classics, featuring Philip Langridge and Frank Lloyd in the Serenade, with Langridge also singing the later Nocturne, and Ann Murray as Phaedra in a translation by Robert Lowell (perhaps for copyright reasons, the latter’s text alone is not provided). A highly regarded Peter Grimes of recent years, Langridge has a knowledge and comfort with Britten’s music that makes this an essential version for lovers of the Serenade, and with fine versions of the other pieces and at Naxos’ very affordable cost, none should resist.
Stuart Bedford and the English Chamber Orchestra must be commended as well. Every detail of Britten’s scoring must be sensitively rendered. In the bare, ghostly space Britten creates, any inadvertent scrape or miscue would tell, and harshly. Recorded in atmospheric, natural sound, a palpable chill sets in with the horn’s initial tired, lamenting call. The strings perfectly render the glittery dew effect in the Tennyson “Nocturne” of the Serenade (“The splendor falls on castle walls…”). And when the “Dirge” begins to grow harsh, almost manic in its insistent rhythm, the orchestra has the tightly reined power called for.
Langridge doesn’t force for effects. One listener may detect a slight irony in the dry pronunciation of “a mighty polypheme” at the end of a stanza in the Serenade’s “Pastoral,” but another may not hear that at all. Perhaps the vibrato widens a tad too much near the top, but the mood remains undisturbed. No one performer can inhabit all the moods and subtleties of such a masterpiece, but Langridge’s version earns the highest distinction: it must be heard.
The two other works on the disc also receive first-class performances. The Nocturne of 1958 may not match the Serenade as an achievement, but it cannot be slighted. Naxos might have done well, however, to place Murray’s Phaedra in the middle rather than at the end, at least for tonal variety. A very late piece – 1975 – Phaedra’s spectral scoring and eerie effects – including a harpsichord – come across with insidious vitality.
Naxos deserves our thanks for reviving this fine recording, but we need other companies to step forward and record some of the other fine tenors of today in the Serenade. Just thinking of English-speaking singers, Michael Shade could well give a fine performance, as could another tenor making a name as Grimes, Anthony Dean Griffey. Or if the recording companies aren’t interested, shouldn’t the various symphonies and philharmonics be? Surely something other than the Four Sea Interludes, for example, can represent the work of this great composer in our concert halls.
In the meanwhile, the home concert hall of the lover of Britten’s music can echo with the haunting music of this splendid disc.
Chris Mullins
Harbor Teacher Preparation Academy