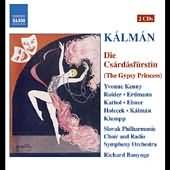 Emmerich Kálmán’s name may be familiar primarily to music lovers d’un certain âge, but between the world wars his operettas were as popular as those of Léhar and Strauss on both sides of the Atlantic. Die Csárdásfürstin (The Gypsy [or Czardas] Princess), which premiered in Vienna in 1915, is his best known, and for good reason. Its book by Leo Stein and Béla Jenbach sparkles and delights, but with reversals of fortune that leave the audience wondering until the last minute how love’s complications will be resolved. The Budapest-born Kálmán (1882-1953; his fellow composition students included Béla Bartók and Zoltán Kodály) apparently was weaned on his homeland’s melodies and czardas, which he mixes generously with Austrian waltzes to create a glorious portrait of the twilight years of the Austro-Hungarian Empire. The piece played the New Amsterdam Theater in New York in 1917 as The Riviera Girl, with a new book by Guy Bolton and P. G. Wodehouse and added numbers by Jerome Kern.
The story is almost a cliché, but the librettists transform it into a tightly constructed plot that Hofmannsthal might have envied (and probably did, but would never admit it). Prince Edwin loves Sylva, a young cabaret singer. Of course, as in such stories, his family disapproves and wants him to marry a countess. Sylva is about to embark on an American tour with her manager, Boni. (She’s a very successful young cabaret singer!) Edwin signs a document promising to marry Sylva in eight weeks. In those eight weeks he will almost marry the countess, Sylva and Boni try to trick him with a sham marriage, Sylva tears up the document and releases him from his promise, and all is finally resolved by means of — heredity.
Heredity was popular with the Nazis, of course. The Jewish Kálmán was offered honorary Aryan citizenship, but he had the good sense to move first to Paris, then to America; he returned to Europe after the Second World War. The Nazis in the beginning years of their regime showed flexibility on what constituted “degenerate art” if it suited their purposes. A film version of Die Csárdásfürstin was a smash hit when it was released in 1934 by UFA, Germany’s MGM. Nazi motion pictures chief Joseph Goebbels, who envisioned himself as Louis B. Mayer and Irving Thalberg rolled into one, was known for his own affairs with actresses, one of which required Hitler’s intervention when Goebbels’s wife threatened to divorce him and the actress’s irate husband reportedly roughed up the Propaganda Minister (a news item that didn’t make it into the Völkischer Beobachter). But after the film’s release, performances of Kálmán’s works were banned.
At the work’s premiere in 1915, some critics clamored that it was unpatriotic (probably Kálmán’s being Jewish would make anything he wrote unpatriotic in their eyes), since it depicted a prince of the blood romancing an actress. Let’s review the Hapsburg family’s support of the arts for a moment. Even Emperor Franz Josef himself had something of a reputation for waiting around for the girls upstairs. The actress Katharina Schratt, “the illegitimate Empress of Austria” as pianist and wag Moriz Rosenthal called her, had been appointed Vorleserin (Reader) to Franz Josef and his wife so that the appearance of the Emperor’s mistress at Schönbrunn or his summer villa at Bad Ischl would be “proper.” Among the Emperor’s three grandsons, the third, Otto, father of the final Emperor, Karl I, was notorious for being a stage-door Johnny. So, although being realistic is often at odds with being patriotic, Die Csárdásfürstin was definitely realistic in its reflection of social life at the center of the Empire.
Die Csárdásfürstin has seen two previous complete recordings: a heavyweight recording with Anna Moffo and René Kollo, conducted by Bert Grund, on Eurodisc, and one with Erika Köth and Benno Kusche, conducted by Franz Marszalek, on Acanta. Lotte Rysanek and Rudolf Christ recorded a generous selection of excerpts on MasterTone, and Thomas Hampson and Placido Domingo have recorded arias. The Moffo-Kollo recording includes much more dialogue than the new one, but that recording has a 101 Strings sound (and instruments prominently featured that I didn’t hear on the new recording) that some listeners may not care for. The Rysanek recording is distinguished by Herbert Prikopa, who plays Boni as a Hungarian Maurice Chevalier.
Unless listeners are looking for most of the spoken dialogue on a recording, this new release is the one to buy. Tenor Michael Roider’s voice isn’t terribly attractive, but Yvonne Kenny brings a velvety warmness to Sylva, and Marko Kathol and Mojca Erdmann as Sylva’s manager and the countess (think Max and the Baroness in The Sound of Music; one wonders if Lindsay and Crouse modeled them on these characters) mold the comic relief and soubrette roles into well-rounded characters. Most notable, however, is conductor Richard Bonynge, who brings such amazing familiarity with this style to Kálmán’s Hungarian rhythms and melodies that the listener feels like throwing another handful of paprika in the Gulaschsuppe and shouting éljen!
In addition to Die Csárdásfürstin, the second disc holds selections from other Kálmán operettas: Der Zigeunerprimás (The Gypsy Violinist, which the composer considered his finest score), Die Faschingsfee (The Fasching [Carnaval] Fairy), Das Hollandweibchen (The Little Dutch Wife), and Der Teufelsreiter (The Devil’s Rider).
The accompanying booklet includes a detailed synopsis of the operetta along with informative short descriptions of the other works. Both German and English librettos with track numbers are found on the Naxos web site, a commendable practice. This formerly popular mélange, with its well-written and still quite humorous book topped off by a frothy Schlag of waltz and czardas melodies, deserves a look by university opera theaters and smaller companies.
David Anderson