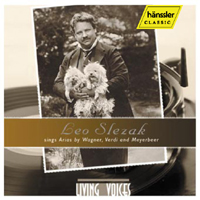 Leo Slezak is generally regarded as a German tenor, although he was actually born in what is now the Czech Republic. But, Moravia, where he is from, was Austrian at the time, and had a significant German speaking population, with German the dominant language of the middle and upper classes. He made his debut in Brno (then Brunn), at a time when most opera performances were sung in German, and, to the best of my knowledge, all of his recordings were in that language or Italian (the great majority being in German). He made over 400 records from a wide repertory of German, Italian and French operas, as well as many Lieder and some operetta. His two published discographies list no records from Czech operas. The arias he recorded most frequently include 11 versions each of the Preislied and “Celeste Aida”, nine of the “Ah, fuyez douce image” and seven of the “Roi du ciel” from Le prophète. His stage repertory could probably be divided into four more or less equal parts. Verdi predominated, with 133 performances of Radames, 130 of Otello, 91 of Manrico, and at least 41 of Riccardo. He also sang Ernani and the Duke in Rigoletto. Wagner and grand opera (comprising Elèazar, Raoul, Jean in Le prophète and Assad), were probably tied for second and third, with other composers, including Mozart, Boieldieu, Gounod, Puccini, etc. coming in fourth. His career was largely centered on Vienna, but also included an important stint at the Met, some stays in Brno, Breslau and Berlin during his youth, and guest appearances in many other centers. He has been described as everything from a “Heldentenor” (in many sources) to a large voiced lyric tenor (by Michael Scott, in his books on great singers). I would split the difference, calling him the German equivalent of a French “fort tenor”, who could sing everything from Mozart to the lighter Wagner roles, and did.
My initial reaction on seeing the selections on the CD was a disappointment in that I felt that the “Heldentenor” aspects of his “fach” were over represented, with Wagner taking up more than half the playing time of the CD. But the Wagner excerpts chosen are so beautifully sung that all can be considered as being among the best recorded versions of each selection. Slezak was gifted with an outstandingly beautiful tenor voice (he was often called the German Caruso), which he used with great sensitivity, and a ringing top. His 1926 recording of the Rome narrative with Theo Scheidl demonstrates just what a wonderful Tannhäuser he must have been, as he was a great Stolzing and Lohengrin. His greatness in these roles is amply demonstrated by recordings of the “Am stillen Herd” and the “Preislied” from Meistersinger as well as his four excerpts from Lohengrin.
I am less enthusiastic about the “Ora e per sempre addio” which is greatly rushed, especially in the dramatic recitative. That, and the “Niun mi tema”, sung at a more reasonable speed, are both in Italian. The other Italian arias are also better, although they suffer from the awesome competition of Italian tenors like Caruso, Gigli, Lauri-Volpi, Martinelli and others.
On the other hand, I am disappointed by the sparsity of excerpts from the other main leg of his repertory: Grand opera. There is nothing from La juive (Eléazar was his fourth most frequently performed opera), or Die Königin von Saba and only two excerpts from Les Huguenots (one of which really is only the tenor half of the first movement of Raoul’s duet with the Queen). Worse, the chosen version of “Roi du ciel”, considered by many to be one of the tenor’s most heroic records, is in rather poor sound.
My biggest complaint about this CD has nothing to do with Slezak’s singing, but with the selection of excerpts. I would have retained all the Wagner, but would have dropped some of the Verdi, especially the “Ora e per sempre addio”. In their place, I would have added his “Rachel quand du Seigneur”, his magnificent “Komm o holde Dame” from La Dame blanche, and his equally beautiful “Magische Töne” from Die Königin von Saba. The result of omitting the last two, or possibly some of his Mozart arias, is that this CD fails to give a balanced picture of all of Slezak’s abilities, including his outstanding mezza voce in a greatly varied repertory. Instead it seems to paint him as primarily a “Heldentenor”, which is only a part of what he really was.
The above quibbles notwithstanding, I can recommend this CD in the strongest terms, and only express the wish that a more complete sampling of the tenor’s work be made available to the general public.
Tom Kaufman
[N.B.: Many thanks to Francois Nouvion for his valuable help on Slezak’s career, especially in Vienna.]