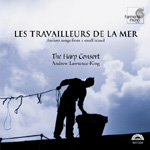 Cast off the shores of Normandy, the tiny isle of Guernsey lies isolated between the two European powers of England and France. Guernsey, however, has remained independent since 1204, and its government, the Bailiwick of Guernsey, comprises the inhabited islands of Guernsey, Alderney, Sark, Herm, Jethou, Brecqhou and Lihou. Rich in an abundant culture and history, Guernsey is well-known for its sea ports, mystic pagan rituals, potent cider, and poetry.
While in political exile on the isle of Guernsey, Victor Hugo (1802-1885) wrote two pieces de resistance, Les Travailleurs de la Mer (Toilers of the Sea) and Les Misérables. He also stimulated a movement of local poets to write in Guernesiais, a mutation of medieval Norman-French and a traditionally unwritten tongue. Among these inspired poets was Georges Métivier (1790-1881), who “discovered” the folk poetry of Guernsey. He promises in his first book of poems, Rimes Guernesiaises, “popular legends, proverbs, sayings, allusions to ancient usages, even to popular mythology, local names, place names, traces of the ancient French language… for the learned man and the man of taste can re-discover a rich mine of memories…” Though the island’s poets were educated men, their songs are saturated in the isle’s folk-culture, encompassing themes such as morality, beauty of nature, love of the island, distrust of the clergy, and beautiful women.
Though some tunes survived from the medieval periods and other local music is clearly linked to 16th-century ballads and ground basses, there are some instances where no island melody survives. Here Andrew Lawrence-King, founder of The Harp Consort, began researching the folk traditions of Normandy and Brittany, to English ballads and French dances, in order to fuse together an appropriate synthesis of music and text.
Les Travailleurs de la Mer: Ancient songs from a small island featuring The Harp Consort and produced by Harmonia Mundi, is a unique jewel of a recording. Each piece is like looking through a window into Guernsey’s mystic past, while being immersed in the beauty and drama of their rough language. The instrumental consort is amazingly free and unpredictable in its interpretation, moving easily from percussive, driving rhythms to flowing sonorities and fluid ornamentation. Even the sounds of the shawm and chifournie emulate Celtic drones and reedy timbres.
Normandy soprano, Clara Sanabras, reveals a stunning connection to the pure sonorities and na&iumlautve themes in these songs. With effortless vocal ornamentation and an easy phrasing, she completely captures all that is beautiful. Sanabras’ voice, however, is not limited to purity of tone, but also displays a meatiness and fullness in several selections. “Les Filles du Câté” is one example where she infuses a masculine quality in the character. English baritone, Paul Hillier, successfully executes many of the more brazen character pieces. His broad interpretations stretch from the almost sleazy parlant recitative style in “Les filles des parreisses” to the meditative in “Seul et content”.
A particularly marvelous recording, blending the unknown repertoire of Guernsey with superior performers, this is a must for any early music or folk enthusiast.
Sarah Hoffman