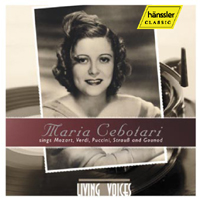 So often we get wrapped up in today’s world of great performers that we forget the performers of the past who, directly or indirectly, influenced these performers and shaped the characters they play. Not one singer today can boast working side by side with Richard Strauss or living in Puccini’s heyday, but Maria Cebotari (1910-1949) could. Thanks to a brilliant re-mastered recording by Hänssler Classic, we are now able to take part in signature performances of a woman who is known as the “predecessor” to Maria Callas.
Born in Russia-Bessarabia, Cebotari discovered a singing voice at the age of four, and began singing solos in the church choir and entered the local conservatory at the age of fourteen. Discovered by Count Alexander Virubov, an actor and manager of a Moscow touring theater company, he and Cebotari fell in love and married in Paris. After only three months of intensive vocal study with Oscar Daniel, Cebotari received a three-year contract in Dresden with Fritz Busch. At the age of twenty-one, she debuted at the Semperoper as Mimi in La Bohème in 1931. She also performed in modern operas and created roles in operas by d’Albert, Lothar, Heger and Sutermeister. Her most important creation was Aminta in Richard Strauss’ Die Schweigsame Frau, as the composer was a great admirer of the young singer.
Like her whirlwind debut, Cebotari reined the opera world for only eighteen years, dying of liver cancer in 1949. Surprisingly, most of the arias chosen for the Hänssler Classic CD are those recorded near her death. Thomas Voigt asks, “Can one listen to those lines in Maria Cebotari’s recording of Ariadne’s monologue without being moved by the fact that the soprano died of cancer at the age of 39, especially if one knows that the recording was made only months before her death?”
Cebotari’s voice is an amazingly flexible instrument, displaying florid virtuosity and bell-like tone in Konstanze’s “Martern aller Arten” while also executing powerful drama and vocal range in Ariadne’s “Es gibt ein Reich.” Her rendition of Cio-Cio-San’s “Un bel di vedremo” is an extremely sensitive and moving interpretation. Unlike meatier sopranos, Cebotari has a slightly lighter weight for Puccini and Verdi, yet this allows for a more buoyant line and freedom to execute an expressive range with florid portamenti. Both Mozart’s Countess Almaviva and Konstanze are jewels for her lyric voice. Her dynamics run along a smooth continuum of warm, honeyed tone and excited breath, which proves for a flawless performance both vocally and expressively.
Hänssler Classic’s “Maria Cebotari” is an excellent way to broaden your library, adding yet another interpretation which is that much closer to the original performance of the opera or aria. This recording might even inspire you to reevaluate your favorite performers of the twentieth century!
Sarah Hoffman