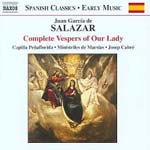 Sacred music from the Spanish Baroque deserves to be held up next to the finest Italian examples of the same period. Equally celebratory in nature, the music written for use in Catholic Vespers services on this recording is an example of the mixed concertante style developed in Venice. While not as monumental as Claudio Monteverdi’s conglomerate Vespers of 1610, the Vísperas Completas de Nuestra Senora by Juan Garcia de Salazar (1639-1710) contrasts polyphonic and homophonic choruses with plainchant, monody, instrumental pieces, and organ improvisation.
This disc intends to establish a coherent musical sequence for the service without attempting an exact liturgical reconstruction. The layout of the Vespers revolves around the five psalms of the office: 109, Dixit Dominus, 121, Laetatus Sum, 147, Lauda Jerusalem, 112, Laudate pueri, and 126, Nisi Dominus, and the Magnificat. The various antiphons, introit, responsories, and prayers, as well as psalms 112 and 126 are sung in plainchant. Psalms 109, 121, and 147, and the Magnificat, however, are complex choral works with intricate polyphony, doubling instruments, and declamatory homophony. In addition, hymns and motets for solo voices and chorus and short organ and instrumental interludes are interspersed throughout the service making for incredible variety of music.
The performers on this recording seem to carry each contrasting style in their blood. The men sing the plainchant cleanly and effortlessly in perfect unison. The motets engage the soloists and chorus in a call and response role. Accompanied by the strumming theorbo and festive brass they could be mistaken for a madrigal at a feast. The choruses are performed with stunning sensitivity to both the complex polyphony and the passionate text painting. The instruments, while often doubling the voice parts, add a pure and intense color both joyous and reflective.
The conductor and baritone Josep Cabré extracts an intensity and excitement from the chorus, Capilla Penaflorida, and early music band, Ministrales de Marsias. Despite an occasional rough intonation spot in the melismas of the polyphonic pslams, the chorus sings with a fervent joy. The Ministrales of Marsias provide an ebullient opening Entrada which is appropriately tapered down when accompanying the Capilla. Overall, this disc provides a remarkable example of the glory of Spanish music at the height of the Baroque in all its variety, excitement, and sensitivity.
Adam Luebke