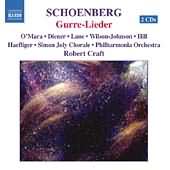 Schoenberg for lovers. Sounds like an oxymoron, but in fact there is enough passion in the too seldom heard Gurrelieder to make even Valentine blush. We know Schoenberg largely from the atonal and dodecaphonic later works (and most listeners know of these mostly by inaccurate rumor). But we forget all too often the fact that Schoenberg had an early period, much of which is readily accessible to conservative tastes. Gurrelieder is the sort of diamond in the crown of this period, a long cantata-like adventure, some two hours in full. Scored for an enormous orchestra, four choirs, and speaker, and five soloists, the work is the logical conclusion of the nineteenth-century penchant for Texas-style excess when it comes to orchestration: you can’t get any bigger than this without havin’ to build a second story.
Fortunately the recording engineers were wide awake on this one, notably so for Naxos. The balance overall is quite good, and this gives the work a kind of live presence, especially with the choirs. They have managed to create a depth that under good headphones rivals $200 seats in leading auditoriums. The strings in particular have a good silky sound appropriate to the work, and the low winds bubble along nicely.
This recording is a side foray by Robert Craft, an adjunct to the Naxos-ticketed recording of the Stravinsky complete oeuvre (see my review of Oedipus and Les Noces elsewhere on this site). Curiously his performance is much stronger here. Perhaps he is more at home with deeply romantic works (which might explain some of the controversy over his recordings of post-romantic works during his controversial career), or perhaps he simply has an affinity for this score. The result rivals (in both quality and price) its nearest competitor, the Ozawa Boston Symphony recording, on Philips (464-040-2). The voices on the Ozawa (McCracken, Norman, Troyanos) are a cut above those here, but tenor Stephen O’Mara and soprano Melanie Diener have a lot to offer the work, and the Philharmonia, a familiar London band, identifies well with the score.
The German text to the work is available on the Naxos website, under the libretti folder, which is a bit of an inconvenience, but understandable since it does run on in length and might have bulked too large in the CD booklet. Unfortunately, only the German text is provided there, no English. A very literal translation of the text is available at http://www.recmusic.org/lieder/gettext.html?TextId=24028. It should be noted that this recording was previously released on the Koch International Classics label.
The text, by a Danish native-son poet Jens Peter Jacobsen, is a kind of death-and-transfiguration ode suitable to northern climates with long winters and sudden springs. Passion moves slowly but, like icebergs, runs deep. This massive emotion-in-large-chunks scenario suited the awakening expressionist in Schoenberg to a tee, and he rises to the occasion. Only in the readily comparable orchestral tone poem Pelleas und Mellisande do we see as clearly Schoenberg’s apparently innate ability to squeeze the last drops out of an orchestra.
So, although its too late for Valentines, it’s not too late to toss a log on the fire, crack open a bottle of finest, grab your squeeze, and head for the couch, saying, “Hey honey, let’s kick back with a little Schoenberg.” Just watch the eyes light up.
Murray Dineen
University of Ottawa