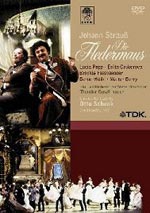 Film freezes time and even serves to transport an enrapt viewer into its temporal world. Viewers of the recent DVD release of a December 1980 performance of Strauss’ operetta classic, Die Fledermaus, may not be quite as ecstatic as the local audience, but resistance is futile. Have some champagne ready for the curtain calls. Lovers of this art form will rejoice, and even the operetta-resistant (of which your reviewer is one) must succumb to the energy, star power, and sheer good will of all involved.
The camera pans the gleeful, expectant audience, and then a lanky young man with hair and glasses that proclaim, “The ’70s are still with us!” sweeps into the orchestra pit. He is Theodor Guschlbauer, and he will prompt the orchestra to a consistently lively, stylishly inflected performance. This is all the more to be commended, as director Otto Schenk, with partner Peter Weiser, have revised the dialogue and more importantly, apparently kept or even increased the total amount. Guschlbauer has to reinspire his troops throughout the evening as they return to their instruments after another hiatus for chatter.
By the time of this performance, Schenk may have known the opera better than Strauss himself, and his love radiates throughout the evening. The sets have the opulent traditionalism he is known for, and the singers/actors have been directed right up to the point of cartoonish caricature, with only the briefest slips over the line.
And what a cast. Bernd Weikl, if fine voice and manic mood, splays his long legs all over. At one point, in the riotous dance than concludes act two, he even resembles John Cleese in his Ministry of Silly Walks skit. More importantly, Weikl is able to let us laugh at the self-important Eisenstein and not get too annoyed with his boorishness, so that his concluding apology can have at least some of its intended effect.
His wife, irrationally ignored, is Lucia Popp. Her act two czardas may not be the last word in Hungarian affectation, but like all her singing throughout the show, it is the purest, sweetest cream.
Moving on to the men, we have the title-referenced pranskter, Dr. Falke, in the person of Walter Berry. He sounds a bit worn in his act two singing, but otherwise contributes greatly to masking the mean-spiritedness behind some of the plot with his enthusiasm. The absurd tenor, Alfred, has surely been sung by more appealing voices than Joseph Hopferwieser’s, but with his puffed-out chest and gloriously self-infatuated air, no complaint should register.
Of the major singing roles, that leaves two truly outstanding performances. Brigitte Fassbaender’s Prinz Orlovsky must be the standard. Boyish and yet even more pleasingly ambiguous, she sings with such smooth tone and high spirit that one regrets that the character has so little to do in act three.
Finally, in a bit of a coup, Edita Gruberova’s Adele seems to have blossomed into one of the leading roles. Something about the role inspires Gruberova to comic greatness, but even better, her agile, luscious voice, here in its prime, makes every solo a highlight. Even a scream in act two comes out as a pearly high note that many another soprano would die for.
Many will find the DVD, and of course the work itself, a laugh riot. Despite all the wonderful attributes described above, your reviewer has to admit with being impatient at times and even mildly put-out with some of the goings-on. The laborious “funny French” scene in act two seems to stretch on forever. And the Frosch, an amazingly limber Helmut Lohner, gets through all the “funny drunk” business with flair and expert timing. But it’s still “funny drunk” business.
In a couple of longuers, supposedly comic, your reviewer’s mind wandered to thoughts about the incipient alcoholism many of the character’s seem to exhibit, and the faintly nasty social stratification, with Adele’s chambermaid position being alternately a source of embarrassment and an opportunity for exploitation (as both the Prinz and Frank offer to take her on as a “protégé.”)
Well, the only answer is to join the singers at curtain call in downing some champagne. The TV director, by the way, shows all the curtain calls, including the solo bows, until it’s time for Weikl and Popp to emerge. Then the cameras swing to the balconies.
Unfortunate, that, but the greater part of the direction is excellent. This series of DVDs, with the insignia “Wiener Staatsoper Live,” continues to provide treasures. Opera Today eagerly awaits the next.
Chris Mullins
Harbor Teacher Preparation Academy