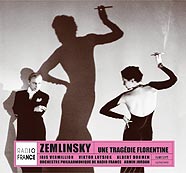 The operas of the Austrian composer Alexander von Zemlinsky (1871-1942) continue to fascinate audiences with their combination of carefully composed music and well-selected librettos. After using fairy-tale elements in his early operas, such as Sarema (1897), Es war einmal (1900), and Der Traumgörge (1905-6), Zemlinsky turned to Renaissance settings for Eine florentinische Tragödie (1917) and Der Zwerg (1922). In fact, Zemlinsky’s Florentinische Tragödie is based the dramatic fragment A Florentine Tragedy, by Oscar Wilde, whose works intrigued other composers of the time. Beyond the provocative drama Salome set by Richard Strauss, Franz Schreker used a story by Wilde as the basis for his ballet Die Geburtstag der Infantin (1908).
With his Florentinische Tragödie, Zemlinsky dealt with an incomplete text by creating a one-act opera. The drama revolves around an assignation between Bianca and her lover Guido Bardi, upon which Bianca’s husband Simone intrudes. Ultimately Simone murders Guido, and the scene ends with the couple responding to each other by acknowledging their attributes. The final lines find Simone realizing Bianca’s beauty, and Bianca commenting on her husband’s strength. Whether that infers renewed love on the part of Simone or suggests fear on the part of Bianca is a moot point, since Wilde went no further. Critics have speculated about what Wilde might have written in the first scene (only the second scene survives), and the fragmentary text itself begs the question of where Wilde would have taken the drama. As a play, it is a drama in medias res, and the challenge facing a composer like Zemlinsky is to arrive at a whole which, in turn, the performers must convey to the audience in a convincing way.
In responding to that challenge, this latest of the three recent recordings offers a finely executed performance. One of Zemlinsky’s most important tools in giving shape to this fragment is his use of music and especially the orchestration to punctuate the drama and to contribute some sonic points of references for understanding the text, and the conductor Armin Jordam treats this aspect of work with a deft hand. Likewise, the cast is well-suited to the piece, with Iris Vermillion singing the part of Bianca, Viktor Lutsiuk as Guido, and Albert Dohmen as Simone. In fact, both Vermillion and Dohmen sang the same roles in the earlier recording of the opera with Riccardo Chailly conducting the Royal Concertgebouw Orchestra (in the series “Entartete Musik” released on London/Decca as CD 455112). This recording is somewhat shorter than the one by James Conlon on EMI Classics (released in 1997, with Debra Voigt as Bianca).
As an opera, this work is compressed as if it were a miniature, with every gesture carefully weighted. The music rises and falls as the characters comment to each other portentously. At times, the silences in the orchestra are striking and suggest similar places in the score of Debussy’s Pelléas et Melisande, a work with the kind of responsive conducting Jordan evinces in this recording.
In this reading, the work builds almost obsessively, as the characters begin to understand each other. In fact, the penultimate number, the interchange between Guido and Simone that begins “Simone, jetzt muss ich nach Hause gehn!” is tellingly intense in leading to the dénouement in the finale trio. The impassioned singing of Lutsiuk as he is murdered is powerful, just as the subdued tones of Dohmen as reflects on what he just did sounds convincing as the orchestral accompaniment underscores his plaintive realization of Bianca’s beauty. The music that Zemlinsky composed to bring this work to a close is, in a sense, a commentary on the libretto, and Jordan’s handling of the final measures gives the work the kind of closure that makes the score effective.
This is the latest of three CDs of Die florentische Tragödie in current release, and it is an excellent choice for those who might want only one recording in their personal collection. A further strength is the fine essay by François-Gildas Tual, which is included in the booklet that accompanies the CD. In fact, Tual’s comments about the relationship of this opera to Berg’s later work on Wozzeck and Lulu are noteworthy. The booklet includes the full German text, along with translations in French and English.
James L. Zychowicz
Madison, Wisconsin