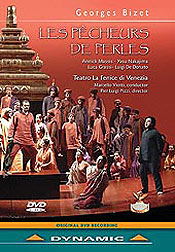 Les Pecheurs de Perles is not a terribly major opera. Ned Rorem once memorably described it as “harmless” concerning the occasion on which it shared a double bill with the world premiere of Poulenc’s Les Mammeles De Tiresias. But for a competent early work by a promising composer who went on to greater things (well, one greater thing, given his tragically early death), Pecheurs has been given an enormous amount of attention both on stage and in the recording studio. An attractive work of conventional Second Empire French oriental exotica, it’s blessed to contain two beloved numbers that have won the hearts of opera lovers whose loyalty keeps it before the public with some frequency.
One of those numbers does not appear on this Dynamic video in its familiar form. The Teatro La Fenice production presents the composer’s original 1863 score, without the cuts and touch-ups provided by Benjamin Godard who restructured the beloved duet “Au fond du temple saint” into the form known popularly today. He threw out the C section, repeating the A section to create a da capo structure concluding the duet with the most famous music in the opera–generally to thunderous applause. Heard here in Bizet’s original form the C section takes Nadir and Zurga into a gentle martial rhythm that prefigures the Carlos-Roderigo duet in Verdi’s Don Carlos four years in the future. There are various other differences, particularly in act 3.where the standard Choudens edition truncates the final scene. Nadir has a solo in the opening chorus, followed by a duet with Leila in the original. Zurga is not struck down for treason by Nourabad in this edition either, but lives on to watch the lovers depart, mourning his lost love and friendship with each of them.
The production was designed and directed by Pier Luigi Pizzi in warm earth tones highlighted by saffron and gold. Pizzi frequently has dancers enacting scenes from the past upstage in pools of light as they’re being remembered downstage, most aggressively in a semi-aerial ballet by a dancer as Leila during the famed duet. The action takes place on a gently curved platform, whose ends rise at either side, in front of a temple in the form of a gilded stupa at the top of black lacquered steps up center. For some scenes a gilded Hindu stature provides the only backing. Pizzi places his chorus in traditional groupings that allow video director Tiziano Mancini to linger over the beautiful and characterful faces of the Fenice’s sopranos and mezzos in particular. Choreographer/chief male dancer Gheorghe Iancu’s dances are in the graceful calisthenics style that’s relatively common now, creating an occasional grouping with arms and legs in the “now we’re going to become a statue of Kali” mode. It’s all decorative, unchallenging and, well, “harmless.”
The major problem with this performance, one that may bother me more than it will some, is the scarcity of French singing style among the principles. Beyond the estimable Annick Massis, who is in very good form here, there are few head tones to be heard or floating high passages where the score really demands them. . The men all display a certain amount of vocal health combined with the thickened upper middle and top registers of singers who have pushed for power in more dramatic material. Tenor Yasu Nakajima, ideally youthful and handsome for Nadir, tries hard but cannot muster the elegant, finely shaded delivery to make a memorable impression in “Je crois entendre encore.” It becomes just another aria competently sung in the prevailing international vocal style. Much the same can be said for Luca Grassi as Zurga. The clarity of vocal production with words far forward and floating on the tone that marks the best French singing is not his to give, although his solid, virile baritone and keen dramatic involvement offer rewards of their own. Young Luigi de Donato’s bass is a work in development, although Nourabad is a small enough role that no particular harm is done.
Mme. Massis carries the vocal honors here in a stylish performance that wins the biggest audience response. Not a conventionally beautiful woman, her strikingly angular features and physical grace support a beautifully sung, highly expressive performance. Marcello Viotti takes the score seriously, bringing out its lyricism and supporting his singers. The chorus does well with Bizet’s frequent choral episodes, particularly the big anthem that ends act two (here performed without any break into the short final act).
Subtitles are available in six languages including Chinese and Japanese. The sound is clear if just a shade distant at times. On the other hand, microphones aren’t stuck down the singers’ throats. This is an attractive release of a sweet little opera that will give some real pleasure unless you insist on absolutely authentic French vocal style. Whether the original version is an advantage or not will be up to each purchaser individually.
William Fregosi