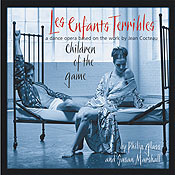 Well I’m trying. The liner notes read: “Les Enfants Terribles, the final installment of Philip Glass’ trilogy based on the work of Jean Cocteau, articulates Cocteau’s belief in the transcendent power of imagination and creativity. It is the story of a brother and a sister, Paul and Lise, two characters so caught up in a world of their own imaginings that they can no longer see a reality beyond their ‘game’.” The music on this cd is the accompaniment to a dance/opera (and thus it’s only half the story — to be as fair as possible to thing). The work is scored for three singers and a narrator, accompanied by three keyboards.
Now I may be getting all this wrong. The Glass and Marshall adaptation of Cocteau’s tale is on the whole wooden, the French text and its translation are cardboard and stiff, the music resembles the accompaniment to a bad ballet class. The story comes off sounding bathetic and moral, whereas Cocteau’s story is decadence incarnate. The whole thing at times sounds like a really bad DeKoven opera. It doesn’t sound like Philip Glass.
But, that may in fact be the point. How is one to set Cocteau anyway? Not in a conventional, straightforward setting — modern, postmodern, or whatever. Glass’s setting is disturbing — certainly in a way I’ve never been disturbed by him before. It sounds pretentious, downright sickeningly so at times. Perfect Cocteau.
If this is in fact the point — if Glass has given us such a subtle mis-take on Cocteau and opera, then he is a genius. If the opposite is the case, if this is supposed to be some kind of normal setting of an operatic text (after Menotti), then I’m bailing out. At this point, after several close listenings, I’m leaning to the former opinion (with nagging doubts). But it will drastically rework my impression of Glass, whom I’ve always thought of as a rather tame and unadventuresome composer, although his music is always nice to listen to. Taken as an experimental work, this is adventuresome. I can’t recommend this whole heartedly, since I have reservations.
So I’ll add my caveat emptor: Les Enfants horribles et subtils.
Murray Dineen
University of Ottawa