Gluck did this, first with his Italian version premiered in Vienna in 1762, and then his second French version (Orphee et Euridice) premiered in Paris in 1774. The CD recording detailed here is of the 1774 Paris version, in which the character of Orphee was rewritten for a tenor voice. The DVD recording reviewed here is of the 1859 version reorchestrated by Hector Berlioz, an ardent admirer of Gluck, in which the character of Orphee was rewritten for a female alto (the original Italian opera had Orpheus sung by a castrato). The Berlioz reorchestration was most heard during the late-eighteenth/early-nineteenth centuries, but the 1774 Paris version was the most popular before the Berlioz version.
Gluck was the son of a forester, who spent his childhood in Bohemia. He studied at the University of Prague, and spent most of his employment with the Lobkowitz family in Vienna. He spent some time in London, composing operas for the King’s Theatre, but returned to Vienna in 1750 where he married and composed typical Metastasian operas for Prague, Naples, and Rome. By 1755 Gluck was in charge of two theatres in Vienna, adapting French opera comique for the Viennese stage. In 1761 he met Ranieri de’Calzabigi, who as a librettist was abandoning the conventions of Metastasian opera seria with its overextended melismatic arias and formal performance, towards a new simplicity and dramatic realism. The result was Orfeo ed Euridice in 1762. 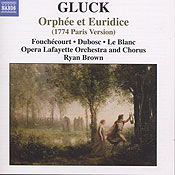 This simplicity in performance and music can best be seen and heard in the DVD performance by the Bayerische Staatsoper. One must remember that Gluck’s opera was astounding to eighteenth-century audiences, who were enamored by Italian opera with its castrati lead roles, long drawn-out arias full of melismas and ornamentation, and characters that had very formal portrayals and movements. Orfeo went against all of that: with its simple monodic arias characteristic of Monteverdi’s reactions against Renaissance polyphony, costumes and scenery that were less formal, and music that was more dramatic. For this interpretation, tuxes are worn by both the main character and the chorus in the beginning. Amour wears a Cirque de Soleil-type costume with baggy pants that flourish outwards at the knees. When Orpheus enters Hades, the demons are represented by cooks who put members of the chorus into ovens and pots for cooking, even displaying various appendages that have been pulled off for stewing. Some of the chorus are hanged on meat hooks. Further into the drama, the chorus dresses in togas, marking across the stage during certain parts of Orpheus’ arias, while puppets of a cat, monkey, and bear briefly appear in the scenery, along with someone in a polar bear costume. At the end of the DVD, the entire Orpheus legend is done as a ballet, with the dancing being done within the framework of a huge television set. The DVD features subtitles in German and English.
In contrast to the female alto role of Orpheus in the DVD (sung by Vesselina Kasarova), the CD of the 1774 Paris version features a male tenor in the role of Orpheus. This performance was recorded in a studio, rather than as a live production. The sound difference between a female alto and a male tenor does, of course, produce a contrast that one has to experience when listening to operas of the eighteenth century. Since Opera Lafayette is a period-instrument ensemble dedicated to performing the music of the seventeenth and eighteenth centuries as close as possible to the way it would have been performed, the CD has a much crisper and exact sound tone than the DVD performance, which was done by a modern-day orchestra and chorus. The use of smaller orchestral numbers makes the CD recording a more precise and authentic performance of the music. Both this DVD performance and the CD recording, however, provide interesting contrast and entertainment, showing how one musical composition can have numerous manifestations, performance situations, and representations in our modern-day society.
Dr. Brad Eden
University of Nevada, Las Vegas