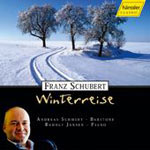 When it comes to any new recordings of Schubert’s song cycle Winterreise, it is difficult not to think of the fine performances by Dietrich Fischer-Dieskau at various points in his career. While Fischer-Dieskau’s recordings can serve as points of reference, the recent CD by the baritone Andreas Schmidt adds to the many excellent recordings that already exist for this work. Schmidt brings to this cycle a personal and effective interpretation that emerges clearly in the recording, where the close ensemble with Rudolf Jansen results in a nuanced performance. By allowing themselves fluid tempos, the performers allow the text to serve the music well. At times they linger over a syllable or stretch a phrase to reinforce the meaning. These are subtle differences that are at the core of experienced and effective Lieder performance.
In “Der Lindenbaum,” for example, the give-and-take of tempo helps to punctuate the text and enhance the meaning of the text. Such interpretive room extends to the dynamic levels, where Schmidt and Jansen match each other well in softening the volume of repeated phrases to reinforce the text, as occurs with the final phrase of that song. In other songs, like “Auf dem Flusse,” the accompaniment is beautifully pointed to set off the vocal line that Schmidt delivers effortlessly. Likewise, the careful juxtaposition of half- and full-voice in “Frühlingstraum” creates a memorable effect that is served well by the sensitive recording levels. If this cycle is dramatic, it is in the carefully placed details that persuade the listener to pay attention to the text and its delivery in this well-conceived recording.
This is a solid interpretation by two accomplished performers who express themselves well in this work, which complements the other Hänssler recordings by Schmidt and Jansen of Schubert’s songs, particularly the cycle Die schöne Müllerin and the collection Schwanengesang. For those interested in Schmidt’s approach to the music the liner notes included with the CD contain Schmidt’s thoughtful comments about the place of this music in his life. His openness to various interpretations of the music and text demonstrates the mature approach to Schubert’s Winterreise.
James L. Zychowicz
Madison, Wisconsin