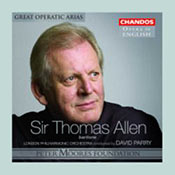 Some 20 years ago I ended my subscription to Opera Magazine after an article by its editor, the late Harold Rosenthal. He had written a review of La Clemenza di Tito that described tenor Stuart Burrows in words that, for those who did not attend the performance, they had missed the second coming of Enrico Caruso, Jussi Björling and Beniamino Gigli in one person. I had attended and I knew that Rosenthal and his colleagues could be almost funny in their chauvinism but enough was enough. Well, I’m happy to report the old tradition still lives on. I looked at some reviews of this recital by British critics and Giuseppe De Luca, Tito Gobbi and Robert Merrill in their heydays would have been proud of such notices.
Now I have some fine memories of Tom Allen (“has someone ever called him “Sir Thomas” in all seriousness?) in the theatre. One Figaro in Barbiere at Covent Garden was especially fine and I liked his aloof diplomatic coolness as Sharpless at the Met as well. But most people will agree that a lot of pleasure comes from his outstanding acting: I suppose he could as easily have had a big a career in straight theatre. Not that the voice is devoid of charm but I doubt Allen himself would call it a great natural instrument, though he makes a sizeable sound that carries well in a big house.
An extremely intelligent performer as Allen slowly built a great career without ever extending his means: as an outstanding Mozartean Allen wisely let big Verdi or Puccini alone and restricted himself to such lyrical parts as Marcello or father Germont. He has been singing since 1969 and there was still a lot of voice left after a 34-year career in this 2003 recording. Most of the arias, however, don’t belong in his natural voice category and it sometimes shows. Take father Miller’s aria “Sacra la scelta” and especially the cabaletta “Ah, fu giusto il mio sospetto.” The voice is somewhat dry and not rich enough for this kind of aria. There is no weight of tone in the middle voice and the angry outburst goes for nothing.
An aria that would suit him better like Valentin’s farewell from Faust suffers from a somewhat dull sound and a top that doesn’t ring free. He is better in one of his best roles, that of Figaro, though there, too, is some unsupported sound that makes the voice opaque.
Allen has no real low notes and he clearly is not at ease in Yeletsky’s aria where he compensates with some caressing tone. He is very fine as the count in Nozze where he sings the rarely performed alternate version of the Count’s aria in an almost tenor tessitura. Tannhäuser too brings out the best in him: soft plangent singing.
I don’t think it a coincidence he is at his very best in arias written in English or in some more showy fare. Billy Budd’s monologue is full of melancholy; finely tuned moving singing. The same can be said of the clown’s aria in the second act of Die Tote Stadt. And then there is room for the magnificent Allen.
I have an inkling that 60 years ago Allen could have been a big star in operetta or classical musical. The moment he started his career the money for classical singers in Europe was no longer in those magnificent, yet dwindling, genres but in heavily subsidized opera. Singers have to eat too! But in his duets of both Fledermaus and The Merry Widow, he is just wonderful: charming, boyish even at his age and with voice to spare. And he doesn’t yield one penny to Gordon MacRae in Billy Bigelows’ Soliloquy. Typically, one doesn’t miss the meaning of one single word in this monologue which cannot be said of the operatic arias, especially in translations with newly minted words by conductor David Parry, who proves to be an accomplished accompanist. Moreover everything is recorded as “come scritto”: every small sentence by a comprimario, every note for chorus is included. To be honest, I wished Tom Allen had given us a whole operetta and musical CD. It would have been a worthy successor to that wonderful CD with love duets from musicals he recorded with Valerie Masterson some 12 years ago.
Jan Neckers