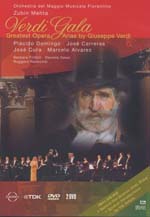 As a live occasion, the gala format allows for a festive atmosphere — a variety of singers trot back and forth across the stage, usually performing a series of “opera’s greatest hits” with no distractions, if one may, in the way of costume, set, or dramatic context. Recorded for posterity, such gala events can lose, for many viewers, the attractions of the live atmosphere and become rather labored exercises.
The DVD of a 2001 concert celebrating the 100th anniversary of Verdi’s death, Verdi Gala, may escape such a judgment for many. The title reveals why: this concert focuses on one composer, and offers a comprehensive overview of the career of the master’s art. Spread over two discs, with a total timing of almost three hours, the program starts with the famous chorus from Nabucco, offers some glimpses of other early Verdi (Jerusalem, the French version of I Lombardi, and Il Corsaro). From there, a leap is taken to the great mid-career masterpieces of Rigoletto, Traviata, and Trovatore, and the disc proceeds to cover the most popular of Verdi’s later operas, before concluding with a reprise of the Nabucco chorus.
The DVD package cover features a blurb boasting of a “behind the scenes slide show” and “spoken introduction by the artists.” The slide show? A dozen or so photographs of the artists in rehearsal, with no captions. The “spoken introductions”? They consist of brief biographical sketches of Verdi and some perfunctory setting of the scenes for the excerpted scenes. Delivered in Italian by the singers themselves, holding scripts, these introductions may prove informative and entertaining to some. Others, such as your reviewer, found them so consistently cringe-inducing that, in order to postpone the day when a Botox injection might be taken into consideration, frequent use of the “skip scene” button on the DVD remote became required. Fortunately, all these introductions are separately tracked.
Inevitably, the value of this DVD comes down to the individual singers, and how many of them overcome the “gala” format to deliver truly musical, dramatic performances. A couple do accomplish this feat, but thankfully, none are truly defeated.
Of the two highlights for this reviewer, Mariella Devia’s rendition of Violetta’s act one closing scene appears first. Accompanied off-stage by Marcelo Alvarez, Devia has the vocal goods for this challenging music, and though not a strikingly attractive woman, she has an air of class and self-possession that projects Violetta’s character very well.
Late in the evening Placido Domingo, looking a bit tired and all of his years, takes on the closing scene of Otello, with Daniela Dessi as his Desdemona. In the longest excerpt of the night (over 20 minutes), Domingo manages the rare feat of finding his character so deeply that the gala trappings – the tuxedo and seated orchestra – cannot distract the viewer. His Nium mi tema must rank with any of his staged performances for tragic depth and pathos, and Dessi’s committed Desdemona deserves admiration as well.
To see Carreras on stage singing opera in 2001, one admires the man’s art and passion, and of course his triumphant personal story, though the beauty that propelled him to a world-class career has long gone. He manages Riccardo’s death scene fairly well, but is more impressive in lesser-known music from Jerusalem and Il Corsaro, the latter sung with an able Elisabete Matos. Younger tenors Jose Cura and Marcelo Alvarez do well for themselves, though this reviewer wouldn’t mind hearing the smoother beauty of Alvarez’s voice in the more dynamic dramatic persona of Cura.
Frittoli surprises with a very convincing Ritorna vincitor; the other key soprano solo comes from Dessi as the Forza Leonora. Her Pace, pace finds her at the outer edge of her range, but not distressingly so.
Veterans Leo Nucci and Ruggero Raimondi cover the baritone/bass sections admirably. The mezzos are not as satisfying. Luciana D’Intino’s Eboli hits all the notes but feels manufactured, and Gloria Scalchi’s Azucena, in the closing scene of Trovatore, delivers her part well without making any greater claims on our interest.
The Parma audience is all dressed up and seemingly enthusiastic, though most audience shots seem to find a few grumpy, unenthused guests. Andrea Bocelli, many will be glad to know, makes only a brief appearance, near the end — he is in the audience.
One major quibble must be dealt with: the subtitles in English insist on capitalizing the first word of every line, even if said line is only the continuation of a previous thought. Distracting.
Finally, Mehta holds the evening together, and by the latter half, really gets some fine performing from his orchestra. He is also to be endlessly thanked for refusing to let audience applause keep him from conducting the last beat of the final Nabucco chorus. He turns and puts his hands out in the universal plea for “stop!” and then, all smiles, gets that final note in. Bless him.
So if one has a great personal affection for gala evenings, and especially for Verdi, this Verdi Gala could be fine entertainment value. If, however, errant capitalization or insipid narration, let alone inconsistent artistic endeavor, dismay one, look for these artists in complete recordings of opera on DVD.
Chris Mullins
Harbor Teacher Preparation Academy