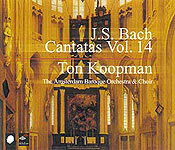 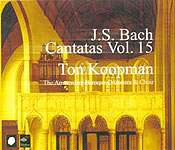 Click image for contents.
These two sets of three CDs each are the current installment in Ton Koopman’s monumental complete cycle of J.S. Bach’s cantatas, performed by the Amsterdam Baroque Orchestra and Choir, and produced by his wife, Tini Mathot. The cycle started out in 1995 on the Erato label, but only twelve volumes had been published when Erato was disbanded by its parent company, Time Warner. After searching for another label that would take over his cycle project, Koopman finally applied for a loan and started his own label, Antoine Marchand, which is distributed by Challenge Classics and Allegro. Koopman’s cycle has loosely followed Bach’s original chronological order of performance for the volumes appearing so far (vol. 1-13.) Appearing after a gap of two years since vol. 13, the current two volumes cover cantatas from Bach’s second to third yearly cycles of cantatas for Leipzig (chorale cantatas.)
There are three other Bach cantata cycles out there, many of which are now out of print. The earliest was Harnoncourt and Leonhardt’s series on Teldec, which used only boys and men as vocalists and an orchestra of period instruments (Koopman actually played organ on some of these). What we would now call the “early music” style was employed in these recordings, and in fact was at least in part probably gelled by these sessions. Helmut Rilling’s more or less contemporaneous series on Hänssler Classic used a mixed chorus and soloists of adult women and men with less attention to the “early music” style. Sir John Eliot Gardiner’s newer series on Deutsche Grammophon, now on his own label Soli Deo Gloria, again uses a mixed chorus and soloists of adults singing in “early music” style and a period instrument orchestra. For practical reasons, Koopman also uses adult women and men choristers and soloists singing in “early music” with a period instrument orchestra.
Unlike the early volumes in this cycle, which were pitched at a very high A of 465 cycles per second (modern concert pitch is at A=440 cps), these two volumes employ the more usual early-music standard of A=415 cps. The chorus of 18 men and women sings cleanly and stylistically for the most part, except for a few spots where vibrato stands out in the soprano section. Choral trills are clean, diction is good, and the blend very nice. The large group of soloists is for the most very good, although there is some struggling on the part of tenor Jörg Dürmüller, and the lowered pitch adversely affects the low notes of bass Klaus Mertens. All of the soloists have agile and clear voices and exquisite diction. The orchestra of period instruments sounds very good, and the occasional organ solos by Koopman are wonderful.
Each volume includes appendices with alternate versions of movements or entire cantatas. Brief program notes by Bach scholar, Christoph Wolff (who also consulted with Koopman on score sources), provide background information for each cantata, and accurate translations from the original German to English and French are provided. All in all, this series (as published so far, anyway) provides a wonderful rendition of Bach’s cantata cycle in historically aware performances.
Betty Woerner