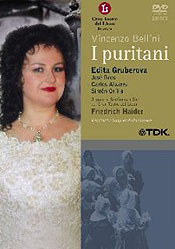 Bellini’s last opera has had its share of classic performances on stage and in studio, but it has not truly challenged the prominence of the reigning work of this bel canto master, Norma. The Druid princess remains such an attraction both for sopranos who aspire to greatness and to audiences who relish its dramatic power that it alone of all Bellini’s works maintains a firm position in the standard repertory.
Musically, surely it would be hard to argue that Puritani has a weaker score — the quartet that begins with the tenor’s luscious A te, o cara can send as many chills down the spine as a well-performed Casta diva, and Elvira’s mad scene contains some of Bellini’s most inspired music. The mature operas of Verdi are visible on the horizon over and over again as the orchestra textures take on a color and depth beyond any of Bellini’s previous achievements.
Why then the relative neglect — though far from total — of I Puritani? A recent DVD release of a February 2001 Liceu production, staged by Andrei Serban, suggests some possible answers, but nothing definite. Ultimately, the performance has too many liabilities to draw any conclusions, except that even in these sadly qualified circumstances, the greatness of the score endures.
The production Serban directs presents most of the problems. First, its muted color scheme — dull earth tones of brown and gray — dulls the senses fairly quickly. Second, odd bits of business intrude — some by accident and some by design. The DVD captures a stage accident — a rifle falls off a rack to the floor early on, making quite a racket. The director — clumsy throughout the performance — won’t allow us to forget the mishap, but instead focuses on a singer replacing the rifle on the rack! Perhaps putting a rickety stand of firearms mid-stage as soldiers troop by made the accident inevitable, however, which points to the director.
Probably it was also director Serban’s idea to have Elvira’s wedding dress trotted back and forth across the stage hanging from a broomstick, like some sort of spooky effigy. Since it seems to take two people to carry it, all one can say is, Elvira must be a strong girl.
Edita Gruberova has made for herself a European-based career of such distinction that her fame extends beyond the continental borders, although she herself rarely if ever seems to leave them. Recently her Adele in Fledermaus, on a DVD of a Vienna performance, showed her in her youth, singing with amazing skill, real warmth and character.
Her Elvira here, however, will please unreservedly only her most besotted fans — many of whom seem to have been in the Liceu for the filming. Sensitivities to pitch fluctuations tend to be subjective, but your reviewer found her to be consistently just slightly under pitch through much of act one. Her high notes in the desperate climax of the act show her finding her best voice, and perhaps that is why she is rewarded for the scena with an ovation for which she breaks character twice to bask in the audience’s devotion (and the same thing occurs after her big act two aria). Perhaps a faulty production needs more dramatic conviction and focus, not less.
José Bros, Elvira’s love who seemingly betrays her before their wedding (in a little Lucia twist) has an attractive face and a handsome head of hair, although beyond that a rather typical tenor physique — short and stout. Any Arturo had better have some personal magnetism, as he gets arguably the most stunningly romantic entrance in all opera, A te, o cara. Here Serban utilizes the elevated walkway and a descending ramp to bring some very dramatic impact to the scene.
Bellini’s music for Arturo famously makes extraordinary demands, and Bros’s secure, highly placed tenor meets them well. But he lacks both the physical stature (maybe the chorus’s line that Arturo “stands most tall” should be omitted from the titles) and vocal charisma to carry off a role that is barely a character sketch.
Carlos àlvarez looks and sounds slightly uncomfortable as Sir Riccardo Forth, sweating under the lights as he tries to sing out Bellini’s long lines. The last two acts find him in more relaxed voice. As often happens, he is a more dashing figure on stage than his tenor rival. More impressive vocally is Simón Orfila as Elvira’s uncle; his handsome deep register dominates the early part of act two. Raquel Pierotti as Charles II’s widow, and the crux to what plot there is, makes one thankful for her character’s brief appearance, due to her unpleasant timbre.
Conductor Friedrich Haider chooses brisk tempos and forceful accents, causing some damage to Bellini’s great score. However, when the music of act three comes closer to anticipating the dramatic energy of Verdi, Haider comes through. Maybe Trovatore would be more his style.
Act three’s over-the-top melodrama, with a quite abrupt dues ex machine finish and hymn to Cromwell, may convince some that Puritani’s main problem is its antiquated dramaturgy. Surely Serban struggled with how to make the piece an effective drama on stage, and his struggles are memorialized on this DVD.
Nonetheless, the best moments here serve as potent evidence that the opera simply contains too much great music to be dismissed. Those of us with a special place in our opera-loving hearts for Vincenzo Bellini’s art can only hope that Puritani will find itself on DVD again, and soon, in a production and with a cast up to its challenges. This Liceu performance, flawed as it is, will have to serve till then.
Chris Mullins
Harbor Teacher Preparation Academy