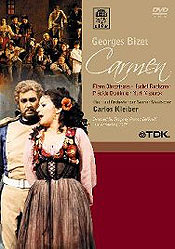 I still remember the incredible excitement in the early 1970s when DGG issued recordings featuring the young conductor, Carlos Kleiber (1930-2004). Both the Weber Freischütz and Beethoven Fifth Symphony showcased the craft of an extraordinary talent, an artist capable of making even the most familiar music sound fresh, spontaneous, and new. Music lovers hoped that this son of the great conductor Erich Kleiber would be a constant presence, both in the concert hall and opera house.
Alas, it didn’t quite work out that way. Kleiber — a recluse who demanded extraordinary amounts of rehearsal time — conducted all too infrequently. As a result, each Carlos Kleiber performance and recording has taken on a treasured status. Recently, DGG issued a number of Kleiber orchestral concerts on DVD, a set that belongs in every music lover’s collection. And, TDK has done Kleiber fans a great service by releasing this 9 December 1978 Vienna State Opera performance of Bizet’s Carmen.
I attended a Kleiber Metropolitan Opera Otello in 1990. I was amazed by the conductor’s ability to achieve an absolutely ideal balance between the orchestra pit and stage. Each and every word emerged clearly, despite the fact that the Met Orchestra was playing with considerable force. Later, I had the opportunity to discuss this Otello with a friend of mine, a prominent executive in the symphony industry who had worked with Kleiber. He told me that Kleiber had gone through the score of Otello and adjusted the dynamics of each and every instrumental and vocal part to achieve precisely the effect I heard at the Met. Of course, it still takes someone with an extraordinary ear to achieve this ideal balance in the heat of performance. And Carlos Kleiber possessed that gift, in abundance.
This 1978 Vienna Carmen radiates a similar kind of magic, at least from the pit. Kleiber treats Bizet’s score as a great orchestral work, which, in fact, it is. The Prelude and Entr’actes are given their full due, with ideal pacing, rhythmic precision, instrumental balance, and articulation. Indeed, these are qualities that apply to just about every measure of this performance. Just by way of example, the opening scene of Act I, up to the moment of Carmen’s entrance, can often seem interminable. Here, with Kleiber’s precise, lively, and ideally-paced reading, the opening whisks by.
The only exception to this level of excellence is the scene in Act I where the workers in the cigarette factory describe the fight between Carmen and Manuelita. Bizet’s lightning-fast and complex writing for chorus does not fare well when presented with lots of stage action. Franco Zeffirelli opts for a “busy” approach, with predictably imprecise musical results. The rest, however, is about all one could hope for. Indeed, I can’t recall a better-conducted performance of Carmen. It’s fortunate that Zeffirelli, who directed both the stage production and this telecast, allows the viewer several glimpses of Kleiber’s mesmerizing presence on the podium.
The singers are of more variable quality. Mezzo-soprano Elena Obraztsova brings a confident, relaxed stage presence and powerful voice to the title role. But Carmen is a part that requires a considerable amount of musical and acting nuance. Obraztsova provides little of either. The voice, which never had a particularly attractive basic quality, becomes even less so under pressure. Her occasional pitch difficulties and unidiomatic French don’t help matters, either. To be fair, no other principal singer in this production would be mistaken for a native speaker. But the opera is named Carmen, after all, and the expectations for that character are (and should be) high. Obraztsova provides a generalized, heartily-sung big opera house Carmen, and not much more.
Much more compelling is the Don José of tenor Placido Domingo. Domingo has achieved remarkable career longevity through a careful and intelligent husbanding of resources. I have nothing but admiration for his accomplishments. Still, it’s nice to be reminded of the tenor’s far more abandoned and robust work in the 1960s and 70s that caused such a stir in the opera world, even when such great singers as Franco Corelli, Richard Tucker, and Carlo Bergonzi were still at or near their primes.
Here, Domingo is in rich and glorious voice, offering a Flower Song that, in tandem with Kleiber’s inspired conducting, elicits an audience response that stops the performance for several minutes. Domingo also offers a convincing dramatic portrayal of a rather unassuming, na&iumlautve man, brought to ruin by his love for Carmen.
The Micaela of Soprano Isobel Buchanan is another great asset. She sings beautifully, and projects an innocence and charm (and, in Act III, courage) that elevate her Micaela to a level far more interesting than the norm. Yuri Mazurok is a handsome Escamillo with a vibrant, high baritone. However, he lacks both the authority in the lower register and ease with the French language to do justice to this relatively brief, but very demanding role.
Kleiber opts for a mixture of the Opéra-Comique spoken dialogue and sung recitatives composed by Ernest Guiraud. Generally, I prefer a spoken dialogue version, but given the lack of native French singers in this production, it’s probably not a bad compromise.
The picture and sound quality are both fine, allowing us to hear Kleiber’s amazing work in great detail, and see Zeffirelli’s larger-than-life production. The DVD features English, German, French, and Italian subtitles.
So, this Carmen is far from an ideal representation of Bizet’s elusive masterpiece. Still, I think all fans of this opera and of great conducting will find it of interest, as it documents the work of an artist whose each and every performance was something to treasure.
Kenneth Meltzer