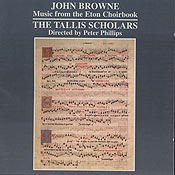 For more than a quarter century, Peter Phillips and the Tallis Scholars have achieved great distinction in the performance of sixteenth-century polyphony, bringing to that repertory interpretations of engaging directness, rhythmic vitality, and fullness of tone. These are qualities that are admirably well suited to the music of the Eton Choirbook and one of its most representative composers, John Browne, the subject of this recent recording.
The founding of the “King’s College of Our Lady of Eton by Windsor” by Henry VI in 1440 was a patronal act of enduring significance. And one of its richest legacies is the sumptuous body of Marian antiphons that are collected in the Eton Choirbook, an anthology compiled in the first years of the sixteenth century. The Marian emphasis was resonant with the dedication of the College and its chapel, reinforced visually by the Flemish-styled paintings of the miracles of the Virgin Mary on the north walls of the Chapel, and liturgically in the statutory daily singing of Marian antiphons at the close of day.
Browne’s antiphons well represent the florid English style of the late fifteenth century. Most striking of its traits is likely the expanded range, which regularly sees five and six parts cover a full three-octave compass, and in so doing, exploits stratospheric, soaring treble lines. The appeal to a love of sonority is unmistakable. That same love of sonority is sometimes gratified by opposite means, as well. If the majority of Browne’s works on this recording feature an expanded range, one antiphon, Stabat iuxti, compresses six voice parts into the tenor-bass registers, where the closeness of the harmonies make the sound unusually rich.
Typically the antiphons alternate between intricate, highly decorated counterpoint for a few voices and grand blocks of tutti sound. And throughout, the rhythmic flow is gracefully animated by cross rhythms at various mensural levels and a propensity to fill up the rhythmic space — much as the harmonic space has been filled up — with frequent off-beat motion.
The Tallis Scholars approach this music with a fluency born of their long experience with this repertory, and it is out of that natural fluency that they are able to offer performances of these works that show both an impressive command of foreground detail and at the same time performances that unfold with a gratifying sense of the architectural whole — ever spacious and ever engaging.
With a compositional style that is reasonably uniform, it is perhaps difficult to single out one piece over another. However, pride of place in the Choirbook itself is given to Browne’s “O Maria salvatoris,” an eight-voice antiphon that is the first in the collection. Its text is Marian in familiar ways though with an Oxonian accent — there are invocations to both Saint Frideswide (the patron saint of Oxford) and St. Catherine of Alexandria (the patron saint of students, known for her besting of fifty philosophers!). Browne was likely in the service of the Earl of Oxford, which would explain this connection, and the collegiate overtones seem nicely adapted to the Eton context, as well. And to my ear, the most memorable parts of the antiphon are its splendid opening and closing sections. The opening is a rich acclamation on the words “O Maria”; the closing an equally rich melismatic effusion on the word “melodia.” It would be difficult to imagine anything more satisfyingly emblematic of the collection as a whole.
Steven Plank
Oberlin College