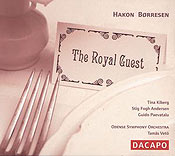 When this CD arrived, I had never heard of Danish composer Hakon Børresen (1876-1954). Baker’s gives him only a few lines, and a Google search didn’t turn up much information until I found a Danish site (www.samfundet.dk) with interesting biographical details to supplement the little biography in the CD notes. When I put the CD on and sat back to listen, I suddenly realized I had heard, if not heard of, Børresen before. It’s Richard Strauss! Or maybe Edward Elgar. The composer seems to have remained firmly rooted in the nineteenth century (or maybe Hans Pfitzner) until his death, three years after that of Arnold Schoenberg. That he retained his leadership of the Danish Composers’ Society during the Nazi occupation until he was ousted in 1948 may say something about his conservative nature as well.
This little conversation piece, first performed in 1919, adapts a story by Henrik Pontoppidan, another of those Nobel laureates in literature whom taste and history have forgotten. The story isn’t terribly original: during Carnival, just before Ash Wednesday, a middle-aged couple is expecting guests for the holiday when a telegram arrives with the news that they won’t be coming. After some brief annoyance, the couple settles back into their comfortable routine, from which passion and excitement disappeared long ago. Suddenly sleigh bells announce the arrival of a guest. An unknown man appears, claiming to be a friend of the town pastor, and begs the couple’s hospitality for the evening. The lady of the house is more reluctant than her husband, but both are astonished when the strange guest asks to keep his identity anonymous, going by the name “Prince Carnival.” He leaves to change into formal wear and encourages the couple to dress for dinner as well, for the first time in a long while.
Returning to the dining room first, the guest directs the servants to light all the candles and strew violets all around the room. The husband and wife quickly fall under his spell as he praises love and speaks whimsically of his adventures with cupids and satyrs and an encounter with the god Pan. As the wife begins to fall under his spell, her husband grows alarmed. The mysterious guest senses this, and announces that it is time for him to leave. Once he is gone, the husband jealously accuses his wife of unseemly behavior. He quickly regrets the accusation, however, and they make up, realizing that the evening has relit the flickering candle of their relationship. As they exit into the bedroom, sleigh bells are heard in the distance.
Børresen composed his opera a few years before Strauss wrote Intermezzo, but his conservatism keeps it from being a complete success. The opera opens with a long prelude à la Rosenkavalier. It ends with a skittering violin postlude à la Rosenkavalier. And all the music in between sounds like, well, Rosenkavalier. Børresen didn’t realize that his usual symphonic, through-composed style wasn’t appropriate for a conversation piece with a lot of dialogue but few set pieces, aside from the guest’s song in praise of Eros. Too many scenes, particularly towards the beginning, drag on a bit long. On the other hand, the composer’s gift for melody suits the magical guest and the spell of enchantment he conjures up. It is one of the most often performed operas in Denmark, though even there performances have dwindled since the death of its principal exponent.
The orchestra outshines the singers in this recording. As conducted by Tamás Vetö, the Odensee Symphony Orchestra captures all the brilliant orchestral color in Børresen’s lush symphonic score. Although the singers aren’t bad, some of the wit is missing that’s needed to bring off this Faschingsschwank aus Copenhagen. Well-known soprano Tina Kiberg captures the wife’s transformation, but tenor Stig Fogh Andersen relies on bluster for the husband, and baritone Guido Paevatalu doesn’t bring enough colors in his singing to the charming magician. This recording is well worth adding to CD collections, and college opera theaters might consider this little piece as an alternative to the usual Cavs and Pags.
David Anderson