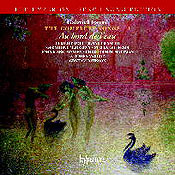 The songs of Gabriel Fauré (1845-1924) are some of the finest works examples of the genre and they represent the mature French mélodie in the hands of a composer who knew both the voice and the piano quite well. This release is the first of four discs that include all of Fauré’s songs for voice and piano within Hyperion’s series of French Song editions. Like those other collections from Hyperion, this volume of the Fauré set involves excellent performers who know the literature well.
By using a variety of singers, Hyperion creates the impression that performing Fauré’s music is not limited to selected personalities, but rather is music that a number of performers do well. Such a stance automatically makes the works more accessible to a wide audience. Unlike the limitations that might be perceived for a particular Wagner tenor or Verdi soprano, Fauré’s music lends itself to good musicianship, rather than a specific, unique voice type, and this is demonstrated clearly in the recording through the talents of several fine performers. The singers on this disc vary from those who have a depth of experience with the genre as a whole, like Felicity Lott, as well as other performers whose repertoire is more focused. Lott’s interpretation of Fauré’s Cinq melodies is masterful for its appropriate tone she gives the music and the text, as required by settings of Verlaine. Of the women involved with the recording, Jennifer Smith provides a fine reading of a late song, C’est la pax (Op. 114), and the duet “Tarantelle” (Op. 10, no. 2) benefits from the crisp and well-matched voices of Geraldine McGreevy and Stella Doufexis, their only piece on the disc.
For those who know “Les berceaux” (op. 23, no. 1) and “Au cimetière” (op. 51, no. 2) from the frequent appearance of those songs on recital programs, the performances by Ainsley and Christopher Maltman are anything but routine. It is also refreshing to hear the impassioned “Chanson du pécheur” (op. 4, no. 1), which Fauré composed earlier in his life. The latter song is performed on this recording by Maltman, whose rich voice is particularly notable in this selection. Likewise, the “Barcarolle” (Op. 7, no. 3) contains elements Fauré would take up in some of his later songs, with its subtly crafted accompaniment that Graham Johnson executes effectively. Again, the unorthodox arrangement of this disc, with its recital-like focus on theme, offers listeners the opportunity to explore this repertoire from a new perspective and, thus, to hear the music with fresh ears.
While Hyperion’s other vocal collections often present music in chronological order, the songs of Fauré are organized thematically. This first volume takes its title from the song Au bord de l’eau (“At the water’s edge”) and collects songs that deal with water or have aquatic settings. In addition to individual songs, this disc features several entire sets of mélodies, including Fauré’s Cinq melodies, op. 58, Mirage, op. 113, and L’horizon chimérique, op. 118, and the pieces selected for this recording are presented in chronological order, from early to later works. While the arrangement by theme may seem unorthodox, if not somewhat arbitrary, it is an effective concept for showing how an idea inspired the composer throughout his career. After all, other similar approaches have been used for years to present traditional German Lieder and other kinds of vocal music.
As to Hyperion’s efforts to preserve the complete songs of Fauré, the other volumes of this projected set include “Un paysage choisi” (vol. 2), “Chanson d’amour” (vol. 3), and “Les jardins de la nuit” (vol. 4). One hopes to find the singers included in the first disc on the rest of the set, so that the spirit and musicianship so evident in this volume may continue through all the music. For those who know Fauré’s works, this “edition intégrale” of his songs is a welcome event which makes his body of work accessible to a broad audience. Those less familiar with this repertoire may find this first volume to be a fine introduction to them.
James L. Zychowicz
Madison, Wisconsin