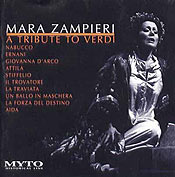 A recurring practice in classical recording studios is “re-mastering” recordings of a legendary artist, sometimes focusing on those artists well known but not frequently recorded. Soprano Mara Zampieri is one of those veteran performers, who appears in a relatively short list of commercial recordings and a few personal compilations. Myto’s new release, Mara Zampieri: A Tribute to Verdi, is proof why this singer has not been recorded more frequently.
Born in Padua in 1951, she received her musical training at the Padua Conservatoire. She made her debut at 21 in the Fraschini Theatre in Pavia. She also was the winner of many prestigious international awards early on, including the AS.LI.CO of Milan. It seems, however, that this premature push in her music career led to a faltering technique, which is evident on practically every track on this recording, not to mention creates an unstable ground from which to perform Verdi.
The disc contains selections from Verdi’s most popular heroines, Abigaille, Elvira, Givanna D’Arco, Odabella, Lina, Leonora, Violetta, Amelai, Leonora, and Aida. Unfortunately, Zampieri handles each role differently vocally speaking, not being consistent in her voice production or in her sensitivity and attention to detail in the music. Indeed, the sound can be very imposing, but the quality stays in the throat and doesn’t bloom into the hall, which gives her timbre that “boy soprano” characteristic.
Some selections included are captivating, such as Odabella’s “Liberamente or piangi… O nel fuggente nuvolo” from Attila. Zampieri exhibits sensitive phrasing and a sensible light and flowing vocal timbre. If only she performed in this way consistently in the rest of the disc!
Alas, one gem of an aria does not a recording make. Foolishly the recording’s producers buried her best work in the middle of the disc, and exposed probably her worst work at the beginning. Zampieri’s Abigaille is atrocious, particularly “Ben io t’invenni o fatal scritto.” The dramatically disjunctive Verdian recitative, moving quickly from extreme high to low, takes her out of her best vocal core and into pinched high notes and tottery chest notes. She loses all grace in the line, something she mastered in the Attila. Her coloratura is also varied in tempo, from the sporadic in “Tutto sprezzo che d’Ernani” to outright rushing in Violetta’s “Sempre libera.”
There are many lyric sopranos performing on world stages today that would be able to undertake a recording such as this and execute each role, each aria with more musical competency. Not recommended.
Sarah Hoffman