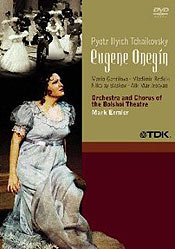 Recently released by TDK, this version of a Tchaikovsky classic was recorded at the Bolshoi Theater in October 2000. Directed by Boris Pokrovsky and conducted by Mark Ermler, the production features Maria Gavrilova as Tatiana, Nikolai Baskov as Lensky, Vladimir Redkin as Onegin, Yelena Novak as Olga, and Aik Martirosyan as Gremin. It is very much a live recording, complete with curtain calls and screaming fans who cheer their favorites after practically every number (to the performers’ credit, there are no encores!).
Billed as a remake of the 1944 Bolshoi production (conducted by Alexander Melik-Pashaev, it is currently available on CD from Naxos), this is perhaps the most traditional of the four Onegin DVDs that will be available this year. Sets and costumes of the duel scene in particular may remind some viewers of the old black-and-white photographs that feature Kozlovsky as the tenor lead. Boris Pokrovsky’s work is typical of this director: his Onegin is a realistic costumed drama with lively crowd scenes and plenty of stage business. There are some nice touches: for instance, in the opening scene, Madame Larina, all aflutter at the arrival of unexpected guests, pretends to read a book while holding it upside down, which Olga promptly corrects. Very few directing ideas are what one would consider revisionist. The only significant one occurs at the end of the duel scene, when Lensky appears to make a gesture of reconciliation, walking toward his opponent with his arms outstretched; Onegin, without noticing, fires the fatal shot.
Overall, Onegin’s coldness and indifference are perhaps over-emphasized throughout Acts 1 and 2 (after his “sermon” to Tatiana in Tableau 3 he looks positively smug), which makes his sudden transformation into a passionate lover in the final scenes rather unconvincing. The fault may not lie with the director here, however: Redkin’s stage presence is stiff and reserved, while the voice is adequate but hardly memorable. Gavrilova’s Tatiana is more likable. Her voice is pleasant, with clear, pure tone in the high register; projection is sometimes an issue in the middle and low ones. On stage, the singer seems more comfortable as the dignified and refined St Petersburg socialite of Act 3 than as the shy country girl of the opening tableaux. In the latter, her repetitive gestures and perpetually ecstatic facial expression tend to get tiresome, although there are some nice moments with the Nurse just before the Letter Scene.
Novak’s Olga and Baskin’s Lensky sing well and look their parts. Novak is young, blond, coquettish, and carefree; her strong, deep contralto is as surprising a contradiction to her image now as it must have been at the opera’s 1879 premiere. Baskin is striking, mannered, and just a touch melodramatic, which Lensky’s music frankly invites. One only wishes that in the ball scene the singer would refrain from smiling so sweetly at his audience as he complains about his girlfriend’s betraying him with his best friend. Martirosyan as Prince Gremin shines in his single aria in Tableau 6. Other minor characters support the ensemble well, although the acting varies from stereotypical but acceptable (Udalova’s Larina) to truly atrocious (Borisova’s Nurse).
In a recent and most unfortunate Bolshoi tradition, the orchestral sound is heavy and loud, with the musicians occasionally finding it hard to stay in tune and in time. Equally predictably, the choristers seem constantly on the lookout both for each other and the beat. The ballet is as fine as ever; in the 4th-tableau ball sequence, Pokrovsky does a nice job mixing the corps with the singing characters, which provides lively action, albeit mostly by way of comic relief.
As for the technical aspects of the release, the DVD features include an easy-to-navigate menu with a select-a-scene option, a choice of different sound formats, and subtitles in multiple languages. Overall, this is a decent enough traditional introduction to Tchaikovsky’s opera for those unfamiliar with it (say, for a class of college students); for a connoisseur, I would suggest checking out the new version with Dyadkova and Leiferkus, which will be out on Kultur label later this month.
Olga Haldey
University of Missouri at Columbia