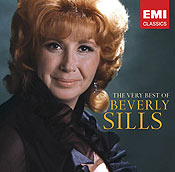 EMI Classics’ release of The Very Best of Bevery Sills is a mixed bag. Unlike similar EMI compilations of Maria Callas, Mirella Freni, or Lucia Popp, who all present an array of signature arias or art songs, this release should be re-titled Some of Beverly Sills’ Opera Scenes and a Few Arias. Though Sills performs with an impressive cast, including Alfredo Kraus, Nicolai Gedda, Sherrill Milnes, and Samuel Ramey, this recording would be much more satisfying if is showcased more of signature Sills.
The CD is divided into a few of her famous roles, featuring an aria or two from each role as well as several pivotal scenes from the opera. Highlighted roles include Rosina of Il barbiere di Siviglia, Gilda of Rigoletto, Norina of Don Pasquale, and Violetta of La traviata. A few arias are randomly included on the second CD, such as “Vilia”, “Dis-moi que je suis belle”, and “Cielo! Che diverro?… Ah! Che spiegar.”
If this recording’s intention was to focus on bel canto repertoire, it has made a grave mistake forgetting Sill’s premier roles in Lucia Di Lammermoor, Anna Bolena, Maria Stuarda and Roberto Devereux. What about her excellent interpretation of French repertoire — Manon, Faust, La Fille Du Regiment, or The Tales of Hoffman? What about her world premier role Baby Doe? This is hardly The Best of Beverly Sills.
Despite faults in recording choices, Sills still exhibits vocal mastery and sensitive musicianship. The recordings span from 1972-1979, from the height of her career toward retirement. Changes in suppleness of her voice are apparent throughout the disc. Her Rosina and Violetta, recorded in 1975 and 1972 respectively, reveal a silvery line, crystalline tone, appropriate weight of the voice, and masterful phrasing. Her coloratura in “Una voce poco fa” is very impressive, especially when executing scalar runs from a well-endowed chest voice to the stratosphere. Everything from her La traviata excerpts is magnificent, from the buoyant line in “Sempre libre” to her audible distraught phrasing in “Ah! Dite alla giovine.”
Recordings from the end of her career reveal reasons why the end was coming. Excerpts from Rigoletto expose a more brittle sound, wider vibrato, and a less brilliant top. However, her “Caro Nome” still stuns the listener with virtuosic trilling, masterful messa di voce, silky lyricism, and impeccable staccato. The vocal weight in this aria brings back memories of an earlier, more youthful Sills, and is entirely appropriate for the role of Gilda. Only in the final cadenza does she punch the coloratura and add too much weight.
There are many compilations of Beverly Sill’s best recordings, and this is not one of them. Fortunately, EMI has a previous release entitled The Art of Beverly Sills which features all of her signature arias from the height of her career.
Sarah Hoffman