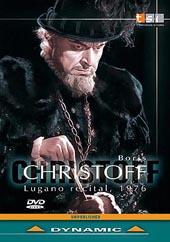 Boris Christoff was, together with Cesare Siepi, the most prominent bass during The New Golden Age of Singing (1945-1975). At the time of this television recording, he was considered somewhat old hat as he had been singing for more than 30 years. During the mid-sixties, he was superseded by Nicolai Ghiaurov who, due to his rolling voice and bigger volume, quickly became the hottest ticket in town. Both men were Bulgarians and there was pure hate between them; especially from Christoff’s side. Christoff was a protégé of the deceased king Boris. He studied in Italy and was not allowed to return home after the war when the communists had snatched power. He didn’t even get a visa to attend his father’s funeral. Ghiaurov was sent to Italy by the communists for further study. Their confrontations as Filippo and Grande Inquisitore in a La Scala Don Carlos are still legendary. Nobody had ever witnessed such (real) hatred in that scene. Afterwards, Christoff demanded that Ghiaurov be ousted but sovrintende Ghiringhelli sided with the younger bass and Christoff’s career at La Scala was finished.
Now that both men are deceased (Christoff died in 1993 and Ghiaurov in 2004), historical perspective has taken its place and it is clear that Christoff was the more imaginative singer and a better one as well, as he kept his voice in better shape far longer than did Ghiaurov. At the time of this live Lugano recital for Swiss television, the older singer was already 62 and, though he cannot quite hide his age, there is still a lot to enjoy. At first there is a somewhat hollow sound and it seems as if higher notes come easier than lower ones. The characteristic timbre, which was Christoff’s glory, is somewhat absent. This could be any good Slav bass.
Things improve a bit in “La calunnia” but it’s only in “Wer ein Liebchen” that the old, well-known black sound to our relief (and probably Christoff’s as well) is back. His great monologue from Don Carlos is very fine though he sometimes has to take an extra breath (In “Amor per me non ha” he takes three); but there is the noble uttering and an even more rounded and finer pianissimo than in his many commercial recordings.
His death of Boris is still the yard stick with which other singers are measured. There is something strange in that scene. He is clearly singing with all his force (no synchro) but nevertheless one hears a chorus that is not on the scene and indeed not even mentioned. So I wonder if this was mixed in later. It’s well possible as this is a European TV-broadcast. TV-directors in those times still thought of themselves as artists instead of craftsmen (indeed, a lot of them still do) and they would always try to apply their artistic touch and so-called sensitivity. (I was a TV reporter and producer at Flemish Public TV at that time and I remember too well the many fights as I wanted these gentlemen to do my bidding instead of theirs). There are a few fine examples to be found in this recording. During the climactic phrases of King Philip’s aria, the camera is fixed for almost twenty seconds on the conductor instead of the singer. The moment Christoff has sung his last utterances in Boris, we get a fake 19th-Century drawing of the Tsar during the postlude and the ensuing applause and we are not allowed to see Christoff during his well-deserved bows.
At the occasion of this concert, young Giorgio Gualerzi interviewed Christoff and I’m fairly sure it was the original director, and not Dynamic, who mixed parts of this interview during the concert proper. Half an hour of singing in one stretch was probably not artistic enough. Gualerzi proves himself to be a pedantic and bad interviewer, always ready to interrupt Christoff. The bass himself has some interesting things to say on older singers (“our professors” he calls their recordings) and modern composers (a hilarious story on Hindemith) who he clearly despised.
The sound of this DVD is excellent and the images are acceptable for the times: not too well focused and a little bit whitewashed. This is not Dynamic’s fault. The seventies and eighties are a disaster for TV-archives. When we switched from film to video, we used all kinds of sizes and we didn’t take precautions for storing. Theoretically, each recording ought to have been copied and recopied each year to keep the colour quality. No broadcasting company ever thought of doing this (and it would have been horrendously expensive) and so five or ten years later the images of many historical happenings had almost deteriorated into oblivion.
Compared with those sad losses, this DVD is still eminently viable. As there are so few documents available on this giant of a singer (the Napoli Forza and a few B/W features), even this registration of an older Christoff is a must.
Jan Neckers