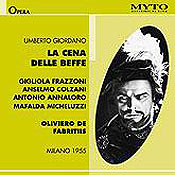 The recording industry has recently been good for Umberto Giordano. We now at last have well recorded performances of Mala Vita (Bongiovanni), Siberia (Gala), Madame Sans-Gene, Il Re and Mese Mariano (all on Dynamic). Still missing are recordings of his first opera Marina, of Regina Diaz, Marcella (Gigli recorded one aria) and Giove a Pompei. La Cena delle Beffe was somewhat better represented. There was a live performance on MRF-LP and in 1988 Bongiovanni recorded another performance (with Fabio Armiliato) in Piacenza. Both recordings however are no match for the RAI broadcast of the 14th of April 1956 (and not 1955 as the sleeve notes say). That recording was already issued several years ago by the same company (Myto 2MCD002.220). The big difference between both issues is that this first version included an Italian language-only libretto while this new issue doesn’t. That can make a difference for enjoying the recording though Sem Benelli’s Italian libretto is not exactly written in house and kitchen Italian.
La Cena was created by Toscanini who clearly believed in the opera and cast it from strength with Lazaro and Melis (Tebaldi’s teacher). When it reached the Met, Ruffo, Alda and Gigli sang it and one can easily agree with the tenor’s fury at Gatti’s decision to press such a strenuous role upon a lyric instrument. After its first rounds, La Cena gradually disappeared and one can understand why. Though the music is firmly tonal, Giordano, of course, knew the works of Zemlinsky and Strauss surely enough; and there is a lot of “meaningful” dissonance to be heard. What ultimately is lacking is the firm melodic touch the composer showed in his best work. The first part of the opera is taken in by a lot of Italian sprechgesang. From the second act on things are getting better though the melodies always sound a little laborious, a little too uninspired. And then there is that one moment of genius in the fourth act when the composer gives us a wonderful serenade (Tornato e maggio), which would be a hit in every tenor’s repertoire if this had appeared in Chénier. Now there is only Alessandro Valente’s recording and moreover in the opera the serenade is sung by the second tenor (one can hear Gigli sigh) and cut short in the second strophe (yes, like in Di rigori where Benelli and Giordano obviously got the idea).
The recording is a good mono one and the singers belong to that last generation that got their musical education when opera and the verismo traditions were still a living thing in Italy. Antonio Annoloro in the title role has a big, somewhat unrefined, spinto tenor that cuts easily through the thick orchestration and he is absolutely convincing as the vengeful Gianetto. He soon realized that with his less than beautiful voice there was a career to be made in unhackneyed operas and in the same RAI season he sang in the best version up to now of Franco Alfano’s Sakuntala ( not on CD but well known in the collectors’ circuit).
As Neri baritone Anselmo Colzani is perfect: sinister where necessary, raging when playing the madman. He too is badly underrepresented on recordings and moreover he was a good actor and he would have been terrific on the scene in this role. Tenor Walter Artioli sings the serenade quite well though one of course longs to hear a Ferruccio Tagliavini in this piece.
All comprimari combine individual sound and incisive singing and we even meet Corelli’s older brother, Aldo, in a small role. Gigliola Frazzoli sings Ginevra with her big, round though not very individual voice and she, too, clearly believes in her role. In fact, the issue is somewhat centred around her as the second CD has only the short fourth act followed by Minnie’s three big duets from Fanciulla, broadcast on the 13th of March 1956. Surprisingly for a radio recording, the sound is rather dull and not better than her well-known complete live recording at La Scala of the same year. As to be expected there are no great differences, either in singing or interpretation, between those two performances. Her radio tenor is Australian Ken Neate with a good solid voice, with gleaming high notes, rather rare for an Anglo-Saxon tenor, and a not very personal or Italian timbre. Though he sings well and stylishly he cannot compete with the thrilling sound of young Franco Corelli in the La Scala recording.
Jan Neckers